What is Wrong in India becoming a Hindu Rashtra? 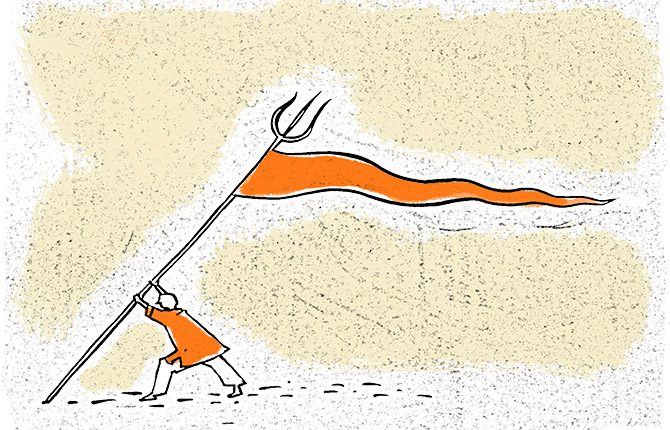 It is alleged that Narendra Modi and the BJP want to make India a Hindu State. If that is so, I question, what is wrong about India being a Hindu Rashtra?

Bharatvarsh, a civilization as old as 5000 years, needs no introduction of it being the original homeland sheltering 95% of all the Hindus in the world and birth place of Sanatan Hinduism. India should not be shy of recognizing her identity as a Hindu Nation. Hinduism is the 3rd largest religion in the world after Christianity and Islam. But it is not demographically as widely spread on the world’s map as the first two. 97% percent of all Hindus live in the world’s three Hindu-majority countries (India, Mauritius and Nepal). It is the most geographically concentrated of all the major religious. 95% of the Hindu population lives in India whereas only 1.6% of Muslims live in Arabia, the birthplace of Islam.

The left-liberals have no problems with the 53 Muslim dominated countries (Islam is the official religion in 27) in the world; 100+ Christian dominated countries. In 15 nations, Christianity is the official religion. These Christian nations include England, Greece, and Iceland, Norway, Hungary, Denmark. and 6 Buddhist countries. Israel is a Jewish state. But, when it comes to India, their rationale fails to make me understand as to why Hinduism can’t be state religion of India?

There is no evidence that threatens the secular ethos of the country, if India is declared a Hindu State. All faiths have flourished in India, including Parsis, Jains, Sikhs, Muslims, Zoroastrians because Hindus are not intolerant towards other religion.

One can go to a religious place associated to any religion and find Hindus there. There is no concept of conversion in Hinduism. There are Christian and Muslim nations in the world who raise voice on the Human Rights abuses and religious persecution of Muslims and Christians the world over. The world remembers Myanmar, Palestine, Yemen etc. but not the Hindus & Sikhs of Pakistan or Afghanistan or that of other Islamic nations! Does anyone remember what happened with the Hindus in Bangladesh during the 1971 genocide by Pakistan Army or the Pundits in Kashmir or the 1998 Wandhama massacre of J&K, systemic elimination of Hindus in Pakistan, the elimination of historic temples and Hinduism in the Arab world, e.g. in Muscat?

The policies of the Indian state have been anti-secular. There has been blatant religious reverse-discrimination against Hindus, its majority community. There are many examples. Have you heard about the Hajj Subsidy? Since 2000, over 1.5 million Muslims used the subsidy. It was only that the Supreme Court passed an order that directed the government to phase out this subsidy within 10 years. Which secular country will subsidize religious tourism for one faith group? The average airfare subsidy was (US$1,000) per Muslim pilgrim in 2008.

While the Indian Government was supporting their citizens’ religious tourism, Saudi Arabia, a country where Hindu icons are condemned as idol worship, was spreading Wahabi extremism worldwide. Hindus are not permitted to build temples and Indian tax payer money was being used to facilitate the Saudi economy by pilgrimage subsidies.

In a truly secular country, all citizens irrespective of religion would be covered by a single set of laws. In India, however, people of different religion beliefs are covered by different personal laws. Government control temples but mosques and churches are autonomous. There were subsidies for Hajj but not for Amarnath Yatra or Kumbh Mela. A truly secular country would not subsidize any pilgrimage at all!

Hindus have always welcomed and protected minorities. Let’s have a look at its history of tolerance. The Hindu Community of India welcomed Parsis when they were persecuted the world over. They have flourished here for over a thousand years. The Jewish tribes found refuge in Bharat nearly 2000 years ago and same goes for Syrian Christians 1800 years ago. The Jains, Buddhists being religions derivatives of the Hinduism have co-existed for 2500 years and Sikhs for 400 years.

It’s time to look back at the facts to feel proud to be a Hindu, not shy anymore!

Even today, India is secular, not due to a Constitutional amendment of 1976 and lawyers and law makers, but because the majority of the people of India are Hindus. It is the very nature of this religion that ensures secularism, not a piece of paper that came into account after thousands of years of tolerant practice. India should openly declare itself as a “Hindu” (Hindu/Sikh/Jain) nation. India should interfere to protect the interests of all of the aforementioned people because no other country is doing it.

Declaring Hindu nation will open new door of safeguarding the majority against forced conversion and minority appeasement. India will remain a progressive country only till it remains a secular country. And it will remain a secular country only if Hindu domination persists in its demographics. Secularism and Hinduism are two sides of one coin. You toss it, in either ways you win!

If India becomes a Hindu Rashtra, that would be the best thing to happen. There would become a Uniform Civil Code with no allowances for anyone (including Hindus). Rule of Law has always been one of the main reasons for Growth in any country- Germany, Japan, USA are all based on rule of law. Conversions (to and against) will be banned, proselytizing which is the root cause of religious friction will stop; no Tablighis anymore. Once conversions are stopped, each person can follow whatever religion he chooses or choose to be atheist (there is a sect called- Nir Ishwara Vad in Hinduism itself). Show me another religion that recognizes non-practitioners of the faith with such regards!

Secularism and religious tolerance is the ethos of the inhabitants of this region much before the Muslim invaders ransacked this land. Muslim invasions into the Indian subcontinent started around 1000 AD and they lasted for several centuries till 1739. Destruction of about 100 million Hindus is perhaps the biggest holocaust in the whole world history. Hindus did not take any revenge of from the off springs of these invaders. It is not Hinduism but the implementation of pseudo-Secularism which is causing interfaith friction between the Hindu majority and the Muslims. In a Hindu Rashtra, the religious freedom of the Non-Hindus will not be clipped.

Hindus must take pride in the history of the land they belong to. They must resort to facts to sort out frictions. They shying away from reality will result into disaster of a land that has its sheer ethos and rich culture of tolerance deeply etched in its soil. India has been foolish enough to give away precious slices to fulfill the demands of Muslim Nations. India has been tolerant enough to practice appeasement in the name of secularism. It time now Hindus must UNITE proclaiming the peace they inherit in them. A Hindu Rashtra, that values secularism through its very nature of practice, devoid of any preamble, will be a citing example for the world.

The time is NOW.