Hanuman – The Path to Ultimate Knowledge

In this article, Pankaj Saxena explains what Hanuman means to Hindus. How he is not just a character in a story. He is the Prana Shakti that drives the life force of the Universe. He is the path to Self-Knowledge. 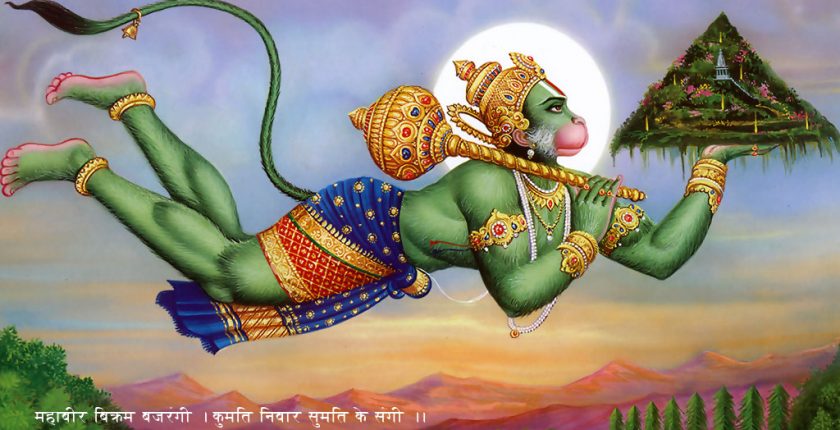 Hanuman is to Life, what Consciousness is to Brahman.

Hanuman is the Prana Shakti that flows within all of us. It is by worshiping Hanuman, it is by meditating upon him, it is by focusing on our Prana that we embark on the journey of self-realization. This is why he is called Pavan Putra. He is the deity guarding Prana.

And consciously watching Prana during meditation is how we still our restless minds, turn inwards and embark on the most wonderful journey that anyone can ever take.

Many, under the influence of ‘scientific temper’ of Nehru try to explain his monkey face by various ‘historical reasons’ citing that how he belonged to a tribe living in jungles and thus was came to called as a Vanara, and so on and so forth.

He has the face of a Vanara because he represents the control that we can have on our restless minds by watching our Prana. He has the chitta of a monkey but at the same time, being Pavan Putra, the devata of Prana, he also has the control over Prana. By meditating upon his form we come to realize that Chitta can be controlled and stilled by Prana. This is how we gain victory over the outward looking chitta, or mind and turning it inwards, make it disappear completely. That is when Pure Knowledge appears, unencumbered by the association of ego and chitta.

Of all the devatas, it is Hanuman whose presence I have always felt to be so potent. Of all the deities, he is the one whom I first turn to whenever I am weak and fearful. He seems to be so literally omnipresent. After all he is the Prana Devata.

If Rama is the Param Tattva, the very goal of Self-realization, Hanuman is the agency through which we achieve that goal. He is the key to self-knowledge.

If Rama is Enlightenment or Ultimate Knowledge Itself, Hanuman, being Prana Devata is the agency through which we achieve our goal. This reflects in our epic, The Ramayana. Hanuman is the one who makes Rama’s journey easy.

He is the one who does even the most impossible of tasks effortlessly. He has everything in his power, but he forgets his true powers and remembers them only when invoked. Our Prana Shakti too lies dormant until it is invoked and once invoked with the agency of the Guru there is nothing that is not in its power.

Hanuman has always been important to us, but it was Goswami Tulsidas who revived his worship with a fervor unseen before and he became a presence in everyone’s chitta. In the south Samarth Ramdas did the same. It was perhaps the need of those hard and bloody times.

Ever since, at least in a large part of India, Hanuman has become synonymous with Hinduism. It is easiest to approach him, to find his temple, to serve him and to invoke him. He is always at one’s call, if only one truly invokes him. He truly is the Prana Devata. The only thing he demands is humility and honesty.

He is to the Vaishnava Tradition, what Ganapati is to Tantra, the devata of Prana.

Hanuman with his beautiful face, calm composure, and every golden hair on his body shining with the potency of knowledge, is the one I invoke today.

Don’t forget to worship, invoke and meditate upon Hanuman, your Prana Shakti this Hanuman Jayanti.

Ayodhya: The Concept of the Sacred Kshetra
Has Hinduism changed or remained the same?
Firecracker Ban - An Attack on the Religious Freedom of Hindus