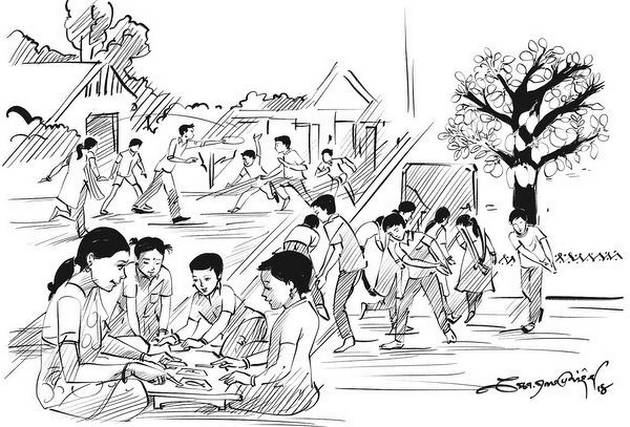 The English education model that was instituted in India in the nineteenth century introduced some radical measures. One such measure was that it became mandatory for all schools to charge a fixed amount of monthly fees from their enrolled students. So, schools were to be maintained by fees paid by students and teachers were to be paid fixed salaries by the government. But how did the old traditional schools sustain themselves before the British arrived in India?

In addition to testifying before the Hunter Commission, Leitner authored his well known History of Indigenous Education in the Panjab. He began this History by posing two fundamental questions: ‘What is this indigenous education which is so held up to admiration? What are these indigenous schools, and how are they supported?’ In October 1882, Leitner conducted an extensive survey of indigenous schools across the entire province of Punjab. He subsequently published this survey in 1883 as part of his voluminous History of Indigenous Education in Panjab. This voluminous report compiled by Leitner, together with the various testimonies recorded before the Hunter Commission, reveal a great deal of information on three particular aspects of indigenous education, namely literacy, curriculum and fees.

Literacy
The exact number of indigenous schools in Punjab, at the time of the Hunter Commission, was itself a matter of controversy. According to the statistics compiled in the 1880-1881 Report of Col. Holroyd (Director of Public Instruction in Punjab), the number of indigenous schools was returned as 4,662. But this figure considerably differed from the numbers reported by Dr. Leitner who claimed that he had enumerated 6,362 such schools in his 1882 survey. To resolve the discrepancy, a special enquiry was ordered by the Lieutenant Governor of Punjab. This enquiry revealed that there were as many as 13,109 indigenous schools in the province in which 135,384 pupils received instruction. In this respect, the Education Commission noted that ‘Dr. Leitner’s largest estimate of 120,000 pupils, so far from being exaggerated, was far below the truth. [1] In view of these revelations, Col. Holroyd admitted the statistical discrepancies in his findings and made due corrections in his report for the subsequent year. Nonetheless, one could not help but notice a sharp continuous decline in the number of indigenous schools since the annexation of Punjab. Leitner argued that the number of pupils attending indigenous schools were half of their corresponding number at the time of annexation of Punjab. [2]

Curriculum
In addition to numbers of schools and scholars, contemporary sources contain fascinating details about the curriculum and pedagogical practices of the traditional patshalas. Pandit Ishwar Prasad, who maintained a patshala at Lahore for twenty years, described in vivid detail the curriculum of several types of indigenous schools. For instance, he used the term Pandahs to refer to the teachers of Chatsalas – the class of schools where specific instruction in account keeping was given to traders. Prasad noted that the instruction in such schools consisted of the following oral multiplication tables: Ordinary, (l to 10) x (l to 10); Superior or called bara gyarah, (11 to 30) x (11 to 30); Fractional, (l to 50) x (1 ¼, 1 ½, 2 ½, 3 ½, 4 ½, and 5 ½, &c.); Some fractions into fractions, 1 ¼ x 1 ½, 1 ½ x 2 ½; 2 ½ x 3 ½, &c.; In addition to these tables, pupils learn account-keeping and ‘small petty sentences resembling verses containing some very useful lessons of every-day life and morality’.[3]

In his work, Leitner has also described in minute detail the pedagogy and curriculum of every kind of native school he came across. With respect to the Gurumukhi Schools, Leitner observed that the ‘economy, simplicity, greater compass, and ease in effacing wrongly-formed letters, of writing on the ground, seem to have much to recommend the practice’.  Having thus learnt the ‘forms of the letters of the alphabet’, the pupil orally recites alphabetically-arranged moral maxims. [4] This stage is followed by writing on a wooden slab or pati, andthe children then learn ‘the forms of the numerals and simple enumeration’, as well as ‘the signs for weights and measures’. Eventually, the pupils are made to write down the ‘names of God, of the people of the house in which they are, of surrounding objects, of eatables, and indeed of everything that can be pointed out to them or that can create an interest’.[5] Leitner’s report also lists the various textbooks that were taught in indigenous schools. In the case of elementary Hindi patshalas, Leitner provided the following list of vernacular titles:Akshar Dipika, Barn Mala, Pahare, Bidhyarthe-ki-Pratham Pushtak, Charnavek, Baital Pachisi, Prem Sagar, Dil Bahlao, Ganit Kirya, Ramayan of Tulsi Das, and Akhyan Manjri. [6]

Fees
The financial model of patshalas is recounted by several witnesses who testified before the Hunter Commission. These witnesses stated that pupils of indigenous schools rarely paid a fixed amount of fees in cash. Instead the teacher was paid through various other modes such as food items, agricultural produce etc. As Baba Khem Singh Bedi testified before the Hunter Commission: ‘The fee is levied according to no fixed scale. A few pice at the end of every month, food and other necessaries of life, such as oil, soap, &c., a rupee or so on entering school, and subsequently at each change of class, or on occasion of marriages, births of sons, are what constitute the fee paid by pupils, or, in other words, the income of the teachers. In villages these men are also given a certain proportion of the produce at each harvest.’ [7] Similar responses were given by other prominent public figures of Punjab. For instance, Lala Mulraj (1877-1945), the first president of the Lahore Arya Samaj remarked in his evidence that most indigenous schools charged no fees at all. The only exception were the schools maintained by Pandhas where reading and writing letters, hundis etc., arithmetical tables and mental arithmetic, and the system of account-keeping were taught. In such schools, according to Mulraj, the fees was one pice a week and bread (roti) on fixed days, and presents on holidays and marriage occasions. Mulraj further noted that the pupils of such schools knew ‘mental arithmetic and account-keeping much better than those trained in Government schools.’[8]

The surveys conducted by Dr. Leitner in October 1882 reaffirmed the impressions of most witnesses regarding the fees charged in indigenous schools. Leitner also found that in several cases, ‘education given by Brahmins certainly to members of their own caste, was gratuitous, as it, indeed, still is, whilst in innumerable instances, now unfortunately reduced to an ascertainable number, the teacher both fed and instructed his pupil.’ [9] More importantly, Leitner found that Ranjit Singh, the former emperor of the Sikh Kingdom, bestowed a large number of grants and jagirs (rent-free lands) to the prominent teachers of every sect. On such lands, the beneficiaries maintained schools that were attended by a large number of students. These jagirs were however taken back by the British when they annexed Punjab, and subsequently with the establishment of the new educational model, all teachers were made salaried servants of the State.

To conclude this article, let us recapitulate some salient points that have emerged not only from the above survey of indigenous education in Punjab but also from similar colonial surveys that were conducted in Madras, Bombay and Bengal. All of these surveys reveal that in pre-colonial , elementary education was quite widespread, democratic, moral, diverse, highly effective and most importantly, education was freely and easily accessible to the vast majority of Indians.