Shall Art Imitate Nature? – The Concept of Sadrsya

In this piece, Ananda Coomaraswamy discusses what is the purpose of Art as commanded by Indian canons as well as other eastern cultures and civilizations as opposed to the purpose of art in the West. He also gives us the concept of Sadrsya in Indian Art, on what is considered to be the true nature of beings. 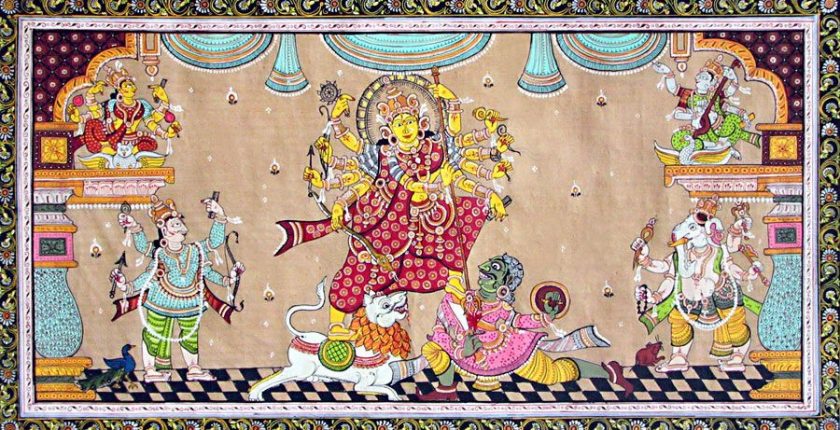 Read the first part of the article here:

We must now give greater precision to this statement, discussing what is implied in Asia by likeness or imitation, and what is the nature of Asiatic types. Lastly we shall be in a position to consider the formal theory of aesthetic experience.

First of all, with regard to representation (akrti, sadrsya, Ch. Hsing-ssu, 4617, 10289, and wu hsing, 12777, 4617) and imitation (anukara, anukarana, anukruti). We find it stated that “sadrsya is essential to the very substance (pradhana) of painting,” Visnudharmottara, XLII, 48; the word has usually been translated by “likeness,” and may bear this sense, but it will be shown below that the meaning properly implied is something more like “correspondence of formal and representative elements in art.”

In drama we meet with such definitions as lokavrtta-anukarana, “following the movement (or operation) of the world,” and yo ‘yam savbhavo lokasya … natyam ity abhidiyate, “which designates the intrinsic nature of the world”; or again, what is to be exhibited on the stage is avasthana, “conditions” or “emotional situations,” or the hero, Rama, or the like, is thought of as the model, anukarya. In China, in the third canon of Hsieh Ho, we have “According to nature (wu, 12777) make shape (hsing, 4617)”: and the common later phrase hsing ssu, “Shape-resemblance,” in the same way seems to define art as an imitation of Nature. In Japan, Seami, the great author and critic of No, asserts that the arts of music and dancing consist entirely in imitation (monomane).

However, if we suppose that all this implies a conception of art as something seeking its perfection in the nearest possible approaches to illusion we shall be greatly mistaken. It will appear presently that we should err equally in supposing that Asiatic art represents an “ideal” world, a world “idealized” in the popular (sentimental, religious) sense of the words, that is, perfected or remolded nearer to the heart’s desire; which were it so might be described as a blasphemy against the witness of Perfect Experience, and a cynical depreciation of life itself. We shall find that Asiatic art is ideal in the mathematical sense; like Nature (natura naturans), not in appearance (viz. that of ens naturata), but in operation.

It should be realized that from the Indian (metaphysical) and Scholastic points of view, subjective and objective are not irreconcilable categories, one of which must be regarded as real to the exclusion of the other. Reality (Satya) subsists there where the intelligible and sensible meet in the common unity of being, and cannot be thought of as existing in itself outside and apart from, but rather as, knowledge or vision, that is, only in fact.

All this is also implied in the Scholastic definition of truth as adaequatio rei et intellectus, Aristotle’s identity of the soul with what it knows, or according to St Thomas, “knowledge comes about in so far as the object known is within the knower” (sum. Theol., I, Q. 59, A. 2), in radical contradiction to the conception of knowledge and being as independent acts, which point of view is only logically, and not immediately, valid. Translating this from psychological to theological terms, we should say not that God has knowledge, but that Knowledge (Pure Intellect, Prajna) is one of the names of God (who is pure act); or metaphysically, by an identification of Being (sat) with Intelligence (cit), as in the well-known concatenation sac-cit-ananda (where it is similarly implied that love subsists only in the act of love, not in the lover or beloved but in Union.

Now as to sadrsya: literal meanings are sym-visibility, con-similarity; secondary meanings, coordination, analogy. That aesthetic sadrsya does not imply naturalism, verisimilitude, illustration, or illusion in any superficial sense is sufficiently shown by the fact that in Indian lists of factors essential to painting it is almost always mentioned with Pramana, “criterion of truth,” here “ideal proportion”; in the Indian theories of knowledge empirical observation (Pratyaksa) as supplying only a test, and not the material of theory, is regarded as the least valid amongst the various pramanas. Pramana will be discussed more fully below; here it will suffice to point out that the constant association of sadrsya and Pramana in lists of the essentials in paintings, for example the Six Limbs, precludes our giving to either term a meaning flatly contradicting that of the other. Ideal form and natural shape, although distinct in principle, were not conceived as incommensurable, but rather as coincident in the common unity of the symbol.

In Rhetoric, sadrsya is illustrated by the example “The young man is a lion” (Bhartrmitra, Abhidha-vrtti-matrika, p.17, and commonly quoted elsewhere); and this analogy very well demonstrates what is really meant by aesthetic “imitation”. Vasubandhu, Abhidharmakosa, IX, Poussin, PP. 280, 281, explains the relation of knowledge (vijnana) to its object by saying that knowledge arises only in the act of knowing, by an immediate assimilation (tadakarata) to its object, neither knower nor known existing apart from the act of knowledge.

The nature of the assimilation (tadakarata) is illustrated by the sadrsya of seed and fruit, which is one of reciprocal causality. The Nyaya-Vaisesika definition of sadrsya (quoted by Das Gupta, History of Indian Philosophy, I, 318) viz. tadbhinnatve sati tadgata-bhuyodhar-mavattam, is literally “the condition of embracing in itself things of a manifold nature which are distinct from itself,” or more briefly the condition of “identity in difference.”

Sadrsya is then “similitude,” but rather such as is implied by “simile” than by “simulacrum.” It is in fact obvious that the likeness between anything and any representation of it cannot be a likeness of nature, but must be analogical or exemplary, or both of these. What the representation imitates is the idea or species of the thing, by which it is known intellectually, rather than the substance of the thing as it is perceived by the senses.

Sadrsya as the ground (pradhana) of painting may be compared to Sahitya as the body (Sarira) of poetry, consistently defined as the “consent of sound and meaning” (sabdartha), and to sarupya, denoting the aspectual coordination of concept and percept essential to knowledge. Accordingly, the requirement of sadrsya does not merely not exclude the formal element in art, but positively asserts the necessity of a concord of pictorial and formal elements. The whole point of view outlined above is already implied in the Kausitaki Upanisad, III, 8, where the sensational and intelligible (formal) elements of appearance are distinguished as bhuta-matra and prajna-matra, and it is asserted that “truly, from either alone, no aspect (rupa) whatsoever would be produced.

History Of Asana And Exercise In India
“A Figure of Speech, or a Figure of Thought?”
Indian Art and the Concept of Pramana