In this article, Dr. Harsh Narain explains how Jizyah helped the spread of Islam in India. It tells us how it was a primary agent in the conversion of Hindus. It also contributed to the systematic impoverishing of India, making it so costly for the Hindus to remain Hindu that they all became poor overtime. 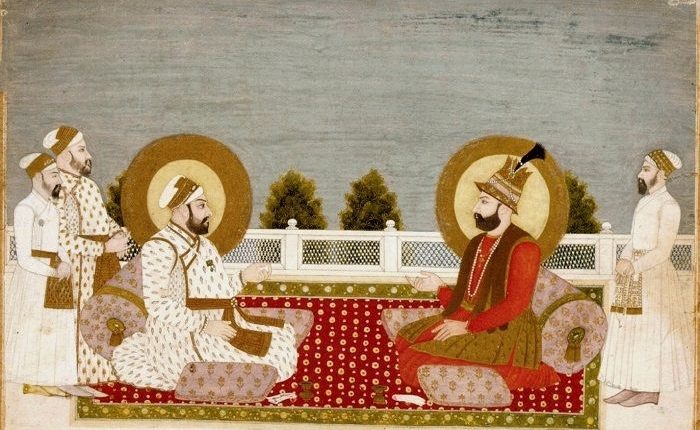 Arab inroads upon the North-west frontiers of India, upon Sindh, or/and upon Baluchistan began as early as the time of ‘Umar, the second Caliph, and continued in the Caliphate of ‘Uthman, ‘Ali Muawiyah, and later on as well. Under Hajjaj bin Yusuf’s orders, Muhammad bin Qasim, a nineteen-year-old Arab, conquered Sindh in 712 AD and imposed Jizyah on the Hindus and Buddhists unwilling to embrace Islam, excepting, however, Brahman-s and ascetics.

For the purpose the Jizyah assesses were divided into three classes, the highest class being liable to pay 48 dirhams of silver (24 silver rupees) per head, the middle class 24 dirhams, and the lowest class 12 dirhams. Muhammad bin Qasim made it clear to the Hindus and Buddhists: ‘Those among you who become Mussalmans and come within the fold of Islam shall have their tribute remitted, but those who are still inclined to be of their own faith, must put up with injuries (gazand) and tribute (jizia) to retain the religion of their fathers and grandfathers.

Upon this, some took to flight ‘in order to maintain the faith of their ancestors’ and ‘their horses’, domestics, and other property were taken away from them. Muhammad bin Qasim took a census of the merchants and artisans and levied a Jizyah of 12 Dirhams of silver on each of them, ‘as they had already lost their property by plunder.’ When defeated by Subuktigin, Jaipal offered Jizyah and Kharaj to him.

During the twelve centuries intervening between the invasion of Muhammad bin Qasim and the death of Aurangzeb, Jizyah remained in force in the India of those days with varying degrees of emphasis but with brief intervals.

‘Ulama’ advised Sultan Iltutmish as well as certain other Sultans not to levy Jizyah on idol-worshipping Hindus but give them an ultimatum of choosing between the alternatives of Islam and death. In view, however, of the overwhelming majority of the Hindus, the Sultans dared not do so and rested satisfied with Jizyah.

Qadi Mughith ad-Din told Sultan ‘Ala’u ‘d-Din Khalji: ‘If the Jizyah-collector ask a Hindu for silver, the latter should offer gold in all humanity. If the collector wishes to spit into his mouth, the latter should open his mouth without demur, so as to enable the former to spit into it. Ala’u d-Din is notorious for having pauperized the Hindus to the utmost limit, but it is not known if he acted upon the Qadis advice.

Like everywhere else, in India, too, a large number of non-Muslims chose Islam for fear of Jizyah. Firoz Shah Tughluq promulgated an ordinance imposing Jizyah on the Hindus including the Brahmanas and exempting them there form on conversion. He writes that as a result of the ordinance ‘the Hindus thronged in clusters after clusters and groups after groups and were glorified by the glory of Islam. And like wise to this day of ours, they come from far and wide, embrace Islam, and Jizyah is off from them.’ (fawj fawj wa jama at jama at Hunud amadand was ba sharf-I Islam Musharraf shudand. Wa hamchunin ila yawmi-na hadha az atraf mi ayand, was iman mi arand, was jizyah az Ishan dur mi shawad.)

The Brahmanas went on hunger-strike and threatened immolation, on the ground that they were never assessed to Jizyah in the past. The Sultan was adamant and told them that he cared a whit even if they all immolated themselves. At long last, other castes took upon themselves to pay for them and the matter came to an end.

Akbar was the first emperor to abolish Jizyah with one stroke of pen, along with all its associations and implications, including the distinction of Muslim and Dhimmi into the bargain. His son and grandson followed his example in regard to Jizyah, generally speaking, but re-imposed upon the Hindus all the other restrictions and disabilities suffered by them before.

In 1679, Aurangzeb reintroduced Jizyah at the usual rates of 48 dirhams on the rich, 24 on the middle class, and 12 on the poor, the rich being those earning ten thousand dirhams or more a year, the middle those earning over two hundred, and the poor those earning less. Following the tradition, he also stipulated that the Dhimmi should carry the Jizyah with his own hand and should come on foot. He should pay it standing, while the Jizyah-collector is sitting. The Dhimmi-s hand should be below that of the collector, who should snatch away the Jizyah from the former’s hands with the remark, ‘Pay the Jizyah, o Dhimmi.

The emperor turned a deaf ear to the Hindus who gathered together by the hundreds of thousands at Delhi and piteously cried for withdrawal of Jizyah. Next day, he ordered elephants to be driven through the mass of men and trample them down, and many did get trampled down. They continued to gather in large numbers for some days more, but to no effect.

A long letter of remonstrance was addressed to the emperor against the re-imposition of jizyah. Its authorship is ascribed to four different persons. The Royal Asiatic Society MS 71, ascribes the authorship to Sivaji, A.S.B. Ms. 56, to Shambhuji (sic), Orme’s Fragments, 252, to Jaswant Singh, and Tod I, 323, to Rama Raj Singh of Udaipur. This, too, failed to have any effect.

From the letter it appears that ‘the Emperor of India’ envying the bowls of beggars, takes Jizya from Brahmans, Jain monks, Yogis, Sannyasi-s, Bairagi-s, paupers, beggars, ruined wretches, and the famished. In the 37th year of Aurangzeb’s reign, however, a parwanah was issued exempting some of the Christian priests of Agra from Jizyah. Again, once finding the people of Hyderabad incapable of paying Jizyah, the emperor granted them exemption for one year.

In spite of ordinances from Delhi for or against the imposition of Jizyah, independent and quasi-independent rulers and governors of certain regions continued to have their own way. So, even after the lifting of Jizyah by Akbar, Jizyah continued to be in force in Bijapur. We shall see that the Sultans of Kashmir were independent enough to strike their own lines in this regard. It is also found that the Sultans had a hard nut to crack so far as goes the question of collection of Jizyah. Their Jizyah-collectors were often driven away by the local Hindu chiefs and landlords. Even Aurangzeb laments that he is finding it difficult to realize Jizyah.

Another invidious tax that the Hindus had to pay under Aurangzeb’s dispensation was duty on commercial goods at double the rate charged from the Muslims.

Aurangzeb’s granting his servants, civil and military, exemption from Jizyah meant little in practice. He was out to debar Hindus from government service, and had to relent at times only when compelled by political exigencies and paucity of suitable Muslim talent.

Another factor, conscription in the hour of military urgency, is made much of as a liability upon the Muslims and not upon non-Muslims and a consequent vindication of the latter’s liability for Jizyah. In India, at least, this principle was followed more in its breach than in its observance. In such an empire as India, large standing armies had to be maintained and manned by Muslims and non-Muslims alike, often more by the latter than by the former, who were few and far between as compared with the Hindus.

In Kashmir, Sikandar Butshikan (1389-1413) imposed Jizyah on the Hindus for the first time. Prior to him, right from Shah Mir (1339) down to Qutub ad-Din (1389), Kashmir knew no Jizyah. Jizyah was finally lifted there in 1586, during the regime of Yusuf Shah, when Akbar annexed Kashmir to his empire; thought its realization had been suspended by Yusuf Shah for Seven years prior to it, i.e. from 1578 till the date of Kashmir’s annexation to the Mughal empire. However, between Sikandar Butshikan and Yusuf Shah comes the golden age of Kashmir, inaugurated by Sultan Zayn al-Abidin (1419-1470), who first reduced the rate of Jizyah and then abolished it outright. Jizyah was re-imposed by Daulat Chak, the prime minister of Sultan Islam Shah (1538-39), upon the Brahmanas, who happened to be the only Hindus living in the then Kashmir.

The rate of Jizyah levied by Sikandar Butshikan was two pala-s (about I tola and 6 masha-s) of silver a year. Zayn al-Abidin first reduced it to one Masha (and that, too, was seldom realized) and then finally abolished it. But Daulat Chak realized 40 pala-s annually from each male Brahmana when he was invested with the sacred thread (Yajnopavita).

Jizyah has played an enormous role in the spread of Islam in India as everywhere else. Amir Khusrau appears to be right when he says that, had Hanafites law (which alone of the four schools of Muslim law allows to polytheists the concession of survival on payment of Jizyah) not prevailed in India, the Hindus would have vanished root and branch:

Literally translated, ‘Did the Dhimmi-s not enjoy the concession of the Shari’ah, all traces of the Hindus would vanish root and branch.

A unique feature of the situation in Kashmir was that Sikandar Butshikan levied even Zakat on the Hindus, along with Jizyah. Yusuf Shah exempted only boatmen (mallah-s) from Zakat.

We cannot resist the temptation of concluding this chapter with an unusual assessment of the Indian situation today by maintaining that the so-called majority community is still paying something as good or as bad in effect as Jizyah, viz. that part of the taxes paid by the majority which is used exclusively in the interests of the so-called minorities.

The Tabligh Movement or Millions of Bearded Militants on the March - 2
Comparing Religions on Taleb's Anti-Fragility Scale
Jizyah: The Tax of being Non-Muslim