In early February, Jamia Milia Islamia released a CCTV video of its library where the police is seen as entering the library and beating the students who were allegedly studying there. In later videos released by the police, it can be seen that the students were the rioters who were given refuge in the library. Many of them can be seen with stones in their hands. Indian media like NDTV, used to whitewash the crimes of ‘minorities’ claimed the students in the CCTV footage did not have stones in their hands but wallets. Here is a brilliant satire by Satish Verma which exposes this mentality of Indian media. 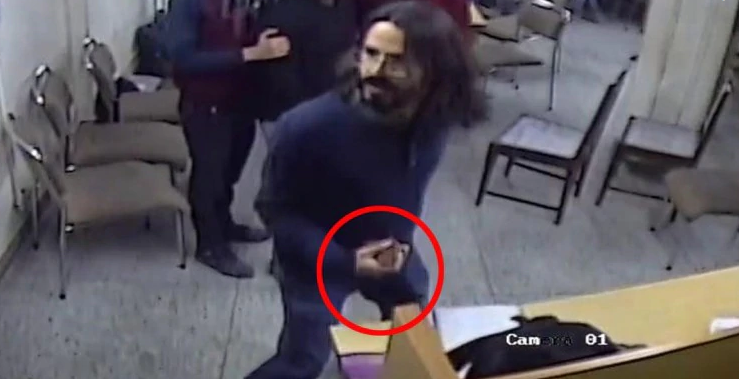 The existence of human society is such a complex phenomenon on the earth that it has never any dearth of questions which need to be immediately settled. The biggest question of our time which has surfaced lately is whether the members of the minority community were holding stone or wallet in their hands in Jamia Millia Islamia. The question can be solved on the basis of video evidence, but doing so will be against the scientific temper inculcated by Nehru and bolstered by Marx. Taking cognizance of historical and spatial realities along with philosophy will help us in arriving the truly scientific answer of the question.

Historically, the status of stone in Pagan societies is radically different from the status accorded to stone in a modern religion like Islam. In Pagan religions, stone is a passive agent of worship which doesn’t have any agency of bringing any material changes or being the medium of change, but the status accorded to stones in Islam is different. In the practice of Jimarat, Ibrahim managed to ensure the vanishing of Devil by throwing three stones which shows the importance of stones in Islamic culture. Stonophobia which is seen in India whenever a member of the minority community picks stones whether it’s Kashmir or Jamia, is one the most vicious forms of Islamophobia which needs to be combated by the secular forces.

If we see it from the perspective of philosophy, a mind which lives in the state of Maya or ignorance differentiates between different objects of the world and sees each object distinct from the other. It’s the typical stage where most of the humans are still stuck at the level of Annamayi Kosha and have no chance of making any spiritual progress. However, the enlightened beings who have realized the unity between Atman and Brahman know that stone and wallet are manifestation of the very same Brahman and the perceptible difference is due to Maya. Atomic theory also says that every matter is composed either of atoms and molecules and the essence is same despite chemical formula of the molecules being different. Thus, the question itself has no validity for the enlightened beings.

In any scientific analysis of the event, unless the scientific tool of dialectic materialism is not used to analyze the event, it will always be an ideological analysis. Stone is a physical entity which has managed to retain its market neutral value despite the multiple efforts by the capitalist forces to turn stones into commodity by using it for different purposes ranging from building materials to astrological significance. However, members of the minority community reject any such capitalist usage of stone and only subscribe to its usage as an agent to launch attack on state which is one of the aspects of bourgeois ideology. A person from the minority community throwing stones to destroy the property of the state or vehicles which are private property is no less revolutionary than Lenin himself.

Another way to settle this question is by considering the historical realities with bit of creative liberty. Minority brethren are accustomed with the practice of throwing stones at Satan in Mecca as religious obligation as illustrated above, and it has been codified in the Islamic laws to provide the same opportunities to Muslims living in other countries by sanctioning stoning women to death for committing certain crimes.

In India, where minorities are deprived of both the opportunities, does it really matter whether it was stone or wallet? The question which everyone should ask must be related to secularism in India failing to provide minority community to engage in its religious vocations and their compulsion to take extra-constitutional measures. Little do people realize that in a deeply unequal country like India where access to scientific labs is extremely rare, throwing stones is one of the ways to study projectile motion directly. The students having scientific temper can easily see the relationship between angle of launch and range without resorting to the use of complex scientific instruments which they’ve no access due to discrimination against the minorities.

The final question still remains unanswered though – how stones and wallets are same? The question can be used by incorporating the teleological perspective as stones and wallets are merely means to achieve ends. Stones can be used to kill someone while the money in wallet can be given to a contract killer to get someone killed. In the end, both can achieve the same goal which establishes the fact that stones are indeed wallets for all practical purposes. Hence, the debate has been settled in the favour of the wallets.