Jizyah, is not a concept which came later in Islam. It is a concept embedded in the very origin of Islam. In this excerpt from his book ‘Jizyah and The Spread of Islam’, Dr. Harsh Narain discusses how Jizyah was implemented by the Prophet himself and how the First Four Right Guided Caliphs made it a permanent institution of Islam, realizing that it was both a source of revenue as well as an ultimate weapon for conversion to Islam. 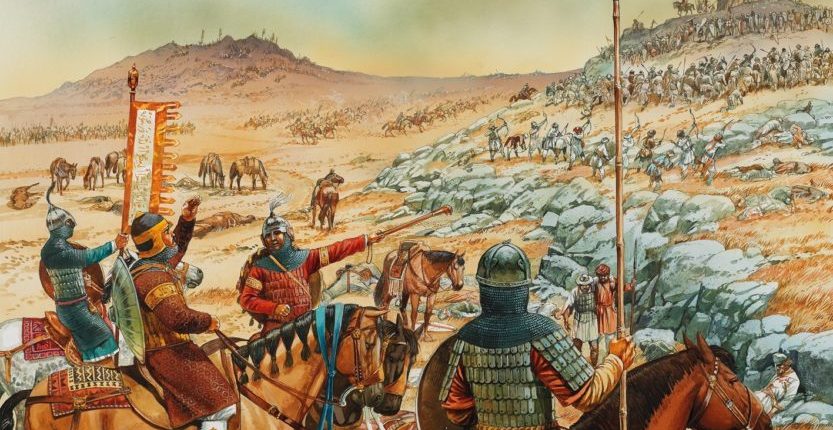 How did Jizyah come to be introduced? It was Najran, a district of Yaman and the greatest center of civilization and Christianity in the Arabian Peninsula. Long before the pretensions of the Quraysh of Mecca whose nobility came to be recognized only after their Islamization and mainly because of their kinship with the Prophet, the Najranites were esteemed as the wealthiest and noblest of the Arabs by all, including poets. Having emerged as the biggest power in Arabia, the Prophet began to send squads of missionaries far and wide to spread Islam.

When one such squad reached Najran, in 629 A.D., the Christians there began to question the validity and authenticity of the Qur’an, which the illiterate missionaries of Islam had not visualized. The Christians drew their attention to the blunder in the Qur’anic description of Mary, Jesus’s mother, as the sister of Moses and Aaron. Mughirah bin Shu’bah, the leader of the mission, failed to reply and reported the matter to the Prophet.

The Prophet called the Christians. Their delegation started in horror, with the following verses on their lips: ‘We are appearing before you in such a way that even the embryo in our camel’s womb is feeling restless. His religion is opposed to that of the Christians.’ When they drew near the Prophet, he turned his face from them and did not talk to them.

Next morning, he invited them to embrace Islam, which they rejected. There was a virtual debate between him and the Christians. The Prophet criticized their doctrine of the Christ’s Sonship of God. Upon this, the Christians asked him who in his opinion was the father of Jesus. The Prophet could not reply. After some time, however, a revelation came to him to the effect that the birth of Jesus was akin to that of Adam.

As regards the Christians’ question about Mary, the Prophet said nothing beyond the statement that the Israelites sometimes named their members after the names of their forbears. When the Prophet failed to satisfy them, however, he challenged them to settle the dispute by the old Arab method sanctioned by the Qur’an, of reciprocal curses (mubahalah). The Christians disapproved of it and withdrew, as the New Testament forbids cursing. Then the Prophet dictated his terms, asked them to embrace Islam, and, upon their refusal, to accept his suzerainty and pay Jizyah. They were made subjects of the Prophet and had Jizyah imposed upon them perforce.

The treaty concluded by the Prophet with the Najranites served as a model for future treaties with Scripturaries, the People of the Book. According to it, the Najranites were to enjoy protection of life, property, and religion, ‘till God ordained otherwise, in return for the payment of an annual Jizyah of two thousand garments (hullah-s) of a specified value plus one uqiyyah (40 dirham-s/ one pound, more or less) of silver with each garment, together with the provision of board and lodging to the Prophet’s envoys for up to a month. It was also incumbent upon the Najranites to lend thirty coats of mail, thirty horses, and thirty camels in the event of a war with al-Yaman and refrain from usury.

Jizyah under the Caliphate

The first Caliph, Abu Bakr, honored the agreement, but ‘Umar, the second Caliph, took advantage of the clause to the effect that the agreement was valid till God ordained otherwise and the Prophet’s will that there should be no non-Muslims in Arabia, and banished the Najranites after buying up their property. He also gave them a writ to the effect that they must be provided with land for residence and cultivation in Syria and Iraq. Thereafter, they had to disperse and seek asylum in Syria and Kufah. In Kufah, they founded a town named an-Nairaniyyah. When ‘Uthman, the third Caliph, came into power, it was represented to him that ‘Umar’s writ served to deprive the original land-holders of their land. He, therefore, decreased their Jizyah by two hundred garments.

The Najranites’ untold suffering constrained them to represent to ‘Ali, the fourth Caliph, to let them revert to Najran in terms of their agreement with the Prophet reduced to writing by ‘Ali himself. But to no effect. They in due course approached the fifth and sixth Caliphs, who decreased their Jizyah further by two hundred garments. Later, Hajjaj bin Yusuf, governor of Iraq, tyrannized over them and enhanced their Jizyah beyond endurable limits. When ‘Umar bin ‘Abd al-‘Aziz became caliph, they complained to him that they were virtually ruined and that they remained only one tenth of their population. The Caliph reduced their Jizyah to two hundred garments.

This in short is the tale of the finest civilization of the Arabian Peninsula uprooted and thrown out of history for good, by what is flaunted as the religion of peace.

Jizyah, the Tool of Conversion to Islam

Jizyah remained an instrument of motivation towards conversion throughout the history of Islam. Besides, believe it or not, it sometimes operated as a stumbling block in the path of conversion. It became an instrument of exploitation at the hands of greedy rulers, so much so that it came sometimes to be levied on neo-Muslims as well, outside Arabia. This became the order of the day during the Umayyad regime. It was ‘Umar bin ‘Abd al-‘Aziz, (d. 720 AD), one of the Umayyad Caliphs themselves, who abolished it altogether.

There appears, however, to have been relapse of the malaise during the regime of Hisham bin ‘Abd al-Malik soon after. One of his governors did exempt the neo-Muslims from the liability to pay Jizyah, but it came to be re imposed when its abolition began to affect the exchequer adversely. ‘Umar, the second Caliph, had earlier practiced the anomaly of imposing double Zakat on the Christians of Banu Taghlib, even though Zakat is due from the Muslims only, according to the Qur’an. This led to complications, religious as well as political.

The Caliph did propose to impose Jizyah on them, but they considered it beneath their dignity to be rendered liable to pay Jizyah, and threatened exodus from the Dar l-Islam. Upon this, ‘Umar was advised not to antagonize that extremely warlike Arab tribe and he levied Zakat on them instead of Jizyah. The tribe preferred it to Jizyah.

Jizyah continued to be used with varying degrees of emphasis for compelling conversion. Twenty-four thousand Christians embraced Islam, when Al-Hafs bin al-Walid, the deposed governor of Egypt, took advantage of the Umayyad family revolution to regain his office and proclaimed (in 744 A.D.) that converts to Islam would be exempted from Jizyah. The same thing happened in 751 A.D., when the Abbasid governor of Egypt held out the same promise.

It was also made incumbent upon the Jizyah-payers of Iraq to guard the paths and bridges and repair these at their own cost. The loss sustained by these Dhimmi-s consequent upon movement of Muslim armies was never compensated for. During ‘Umar’s time, a trade and commerce tax called ‘Ushur was also levied on the Dhimmi-s. Till the time of the fourth Caliph, ‘Ali, eight sources of revenue to the state exchequer had come into vogue:

The Umayyad’s added certain minor sources of revenue to the list.

Out of these, Muslims came ultimately to bear the burden of only the following:

Abu Yusuf prescribes Kharaj on Dhimmi-s at double the rate thereof on Muslims. As regards Zakat, which is flaunted as a liability upon Muslims juxtaposed to Jizyah, it is noteworthy that, though Muslims were expected to pay 40% of their total income of a whole year as Zakat, yet it ceased to be irksome inasmuch as

Thus, Jizyah implies and involves a lot more than the stated sum. It opens the door to unlimited exploitation, and addition of insult to injury, into the bargain. It kept Dhimmi-s exposed to victimization when the state stood in need of money. On the towns surrendering by peaceful treaties, such as Hira, Ullays, ‘Ayn at-Tamr, and Baniqiyah in south Iraq (as-Sawad), and Damascus, Bala’bakk, Hims, and Jerusalem in Syria, imposition of collective Jizyah became the order of the day, so much so that, while those who died or became Muslims were freed of Jizyah, the sum total of Jizyah on each town remained constant, the remaining Dhimmi-s bearing the burden of the Jizyah paid earlier by the deceased while alive and the converts to Islam before their conversion.

For instance, by death or conversion the population of Najraniyyah, founded in Iraq by the Christians of Najran on being driven out of their homeland by the Arabs, dwindled, but neither Mu’awiyyah nor others would easily reduce the quantum of Jizyah. Yahya bin Adam (757-818) rules: ‘All of them are charged with whatever was peaceably agreed upon, taking into consideration their ability to pay from their properties and lands, but nothing will be deducted following death or conversion to Islam of any of them, as the whole should be collected from the rest in accordance with their ability to pay and to be charged.’

‘Umar bin ‘Abd al-‘Aziz had the conscience to abolish the cruel system and enforced a uniform rule that each Dhimmi had to pay Jizyah on his own head. On the other side, when the burden of the ever-increasing liability for the others’ Jizyah on the Dhimmi-s became intolerable, Hajjaj bin Yusuf, the governor of Iraq, re-imposed Jizyah on the converts.