In this second part of the series on Jizyah, Dr. Harsh Narain, one of India’s finest historians of modern India tells us how Jizyah was nothing more than a means of fiscal Jihad, through which conversion to Islam was sought and encouraged by fiscally punishing the Hindus. This is an excerpt from ‘Jizyah and the Spread of Islam’. 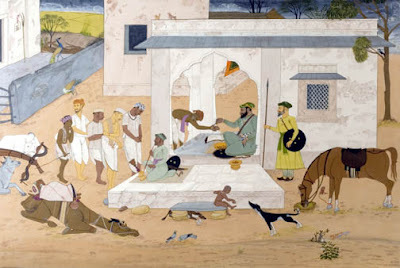 Little research appears to have been attempted on the role of Jizyah in the spread of Islam or even on Jizyah in general. We are aware of only one monograph on it, by Daniel C. Denett. An Article ‘Al-Jizyah’, in Urdu from the pen of Shibli Nu’mani (d. 1916) was hailed by Aub ‘I-Kalam Azad as a major break-through of the modern age in Islamic studies.

Shibli, Denett, and others are inclined to trace the origin of the term and concept of Jizyah to Aramaic ‘gizit’/ ‘gizyat’ (Shibli) or ‘gzitha’ known to have been in vogue from before the time of Khusrau Anushirwan (531-579 AD). It was a kind of capitation tax or poll tax, payment of which amounted to a badge of degradation and a mark of social inferiority. Therefore, privileged classes, such as ruling, military, priestly and educated aristocracy were exempt from it.

For Jizyah, the Byzantine Empire had its own counterpart, tributum capitis, from before circa 290 A.D. Constantine (274-337 A.D.) is reported to have exempted the urban pleb from it. By and by ‘the poll tax became, after fourth century, a burden uniquely assessed on the colonus and identified with this class of society, and that to this tax a stigma, “injuria”, was attached, as in the phrase, “a plebeiae capitationis injuria”. We shall see that payment of Jizyah as prescribed by the Qur’an also carries a stigma with it.

Mohamed Marmaduke Pickthall translates it thus: ‘Fight against such of those who have been given the Scripture as believe not in Allah nor the Last Day, and forbid not that which Allah hath forbidden by His messenger, and follow not the religion of truth, until they pay the tribute readily, being brought low’. This represents the common run of translations of the verse by Muslims and non-Muslims alike. The verse so translated leaves the course of paying Jizyah, as alternative to conversion and death, open to the Scripturaries, people of the book, only.

And the Qur’an recognizes only two communities (ta’ifatayn), viz. Jews and Christians, as Scripturaries. Imam Shafi’i, one of the four great Jurists of Islam, includes the Magians (Zoroastrians) among the Scripturaries, on the basis of a precedent set by the Prophet in accepting Jizyah from the Magians of Bahrin, Hajar, Qatar, Qatif, and ‘Umman. Umar, the second Caliph, accorded this status to the Magians of Persia and Sabaeans of Mesopotamia, ‘Uthman to Berbers of Tunisia, Algeria, and Morocco (all in North Africa), and Muhammad bin Qasim under the Governor Hajjaj bin Yusuf and the Caliph Walid bin ‘Abd al-Malik to the Hindus and Buddhists of Sindh. According to Imam Malik, another of the four great jurists, the verse of Jizyah is applicable to all non-Muslims excepting apostates (murtadd-s).

Imam Abu Hanifah, a third great jurist out of the four, applies it to all excepting the idolaters of Arabia. All non-Jizyah-paying infidels deserve death as a rule.

Our interpretation of the jizyah verse is entirely different. We are inclined to believe that the doors of paying Jizyah are open to Scripturaries and non-Scripturaries alike. Let us examine the verse closely. The verse in question prescribes Jihad against non-Muslims of the following two categories:

The people referred to under the first category cannot be Scripturaries, for the simple reason that all Scripturaries believe in God, the Last Day, and the taboo-non-taboo distinction. Hence only non-Scripturaries come under that category. This is why we maintain that the verse applies to non-Muslims of both the categories.

We would, accordingly, propose retranslation of the verse thus: ‘Fight against those who believe not in Allah nor the Last Day, and taboo not what Allah and His apostle have tabooed, and against such of those who have been given the scripture as follow not the religion of truth, until they pay Jizyah with their own hand, being brought low.’ It is significant that this verse belongs to Surah at-Twabah/al-Bara’ah (Surah 9) revealed on the eve of and for the Great Hajj (Hajj al-Akbar) as the Qur’an calls it, which concerned the idolaters much more than others, for from then on the rule of Jahiliyyah (paganism) yielded place to Islam.

It is also to be noted, incidentally, that in the Meccan treaty, concluded in circa 623 A.D., i.e. about eight years before revelation of the verse under consideration, between the Aws and the Khazraj tribes, to which the Jews were allowed to adhere, no Jizyah nor any other disability was imposed, save the stipulation that, if they took part in a war fought by the Muslims against the Kafirs, they must share the expenses in the joint action.

Well, the thrust of the Jizyah-verse and its implications as worked out and codified in course of time boil down to the following significant points:

To put things straight, we may highlight the following principal motives for imposition of Jizyah:

That is, ‘There is no cure for the blot of servility. It matters not whether it is more or less.

We cannot resist the temptation of quoting Mujaddid-I Alf-I Thani, the second-millennium reviver/rejuvenator of Islam during Jahangir’s reign, on the purpose of imposition of Jizyah: “The real purpose of imposing Jizyah on them (the Kafirs) is their humiliation. And the humiliation goes to the extent that for fear of Jizyah they may not put on good dress and live with dignity/in prosperity and they may always live in fear trembling.’

Prophetic Monotheism: The Longest Running Pandemic in History
The Trouble with Islam Today
Muslims on Islam