The Origin and the Use of Image in India – Part 2

In this excerpt from the book “Transformation of Nature in Art” by Ananda K. Coomaraswamy explains the logic behind image worship in Hindu Dharma. he explains the apparent paradox of Hindu Dharma where the Divine is imagined as without any form or attributes on one hand and on the other multiplicity of forms and attributes are also to be seen quite prevalent in the society. Coomaraswamy explains that in reality there is no paradox. 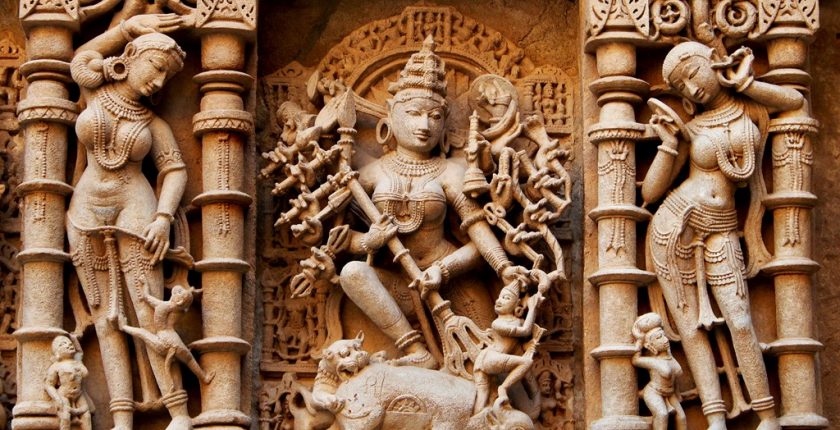 As for India, it is precisely in a world dominated by an idealistic concept of reality, and yet with the approval of the most profound thinkers, that there flourished what we are pleased to call idolatry. Manikka Vacagar constantly speaks of the attributes of God, refers to the legendary accounts of His actions, and takes for granted the use and service of images. In Vajrayana Buddhism, often though not quite correctly designated as nihilistic, the development of an elaborate pantheon, fully realized in material imagery, reaches its zenith. Shankaracharya himself, one of the most brilliant intellects the world has known, interpreter of the Upanishads and creator of the Vedanta system of pure monism accepted by a majority of all Hindus and analogous to the idealism of Kant, was a devout worshipper of images, a visitor to shrines, a singer of devotional hymns.

True, in a famous prayer, he apologizes for visualizing in contemplation One who is not limited by any forum, for praising in hymns One who is beyond the reach the words, and for visiting Him in sacred shrines, who is omnipresent. Actually, too, there exist some groups in Hinduism (the Sikhs, for example) who do not make use of images.

But if even he who knew could not resist the impulse to love, – and love requires an object of adoration, and an object must be conceived in word or form, – how much greater must be the necessity of that majority for whom it is so much easier to worship than to know. Thus the philosopher perceives the inevitability of the use of imagery, verbal and visual, and sanctions the service of images. God Himself makes like concession to our mortal nature, “taking the forms imagined by His worshippers,” making Himself as we are that we may be as He is.

The Hindu Isvara (Supreme God) is not a jealous God, because all gods are aspects of Him, imagined by His worshippers; in the words of Krsna; “When any devotee seeks to worship any aspect with faith, it is none other than Myself that bestows that steadfast faith, and when by worshipping any aspect he wins what he desires, it is none other than Myself that grants his prayers. Howsoever men approach Me, so do I welcome them, for the path men take from every side is Mine.”

Those whose ideal is less high attain, indeed, of necessity to lesser heights: but no man can safely aspire to higher ideals than are pertinent to his spiritual age. In any case, his spiritual growth cannot be aided by a desecration of his ideals; he can be aided only by the fullest recognition of these ideals as retaining their validity in any scheme, however profound. This was the Hindu method; Indian religion adapts herself with infinite grace to every human need. The collective genius that made of Hinduism a continuity ranging from the contemplation of the Absolute to the physical service of an image made of clay did not shrink from an ultimate acceptance of every aspect of God conceived by man, and of every ritual devised by his devotion.

We have already suggested that the multiplicity of the forms of images, coinciding with the development of monotheistic Hinduism, arises from various causes, all ultimately referable to the diversity of need of individuals and groups.

In particular, this multiplicity is due historically to the inclusion of all pre-existing forms, all local forms, in a greater theological synthesis, where they are interpreted as modes or emanations (vyuha) of the supreme Isvara; and subsequently, to the further growth of theological speculation. In the words of Yaska, “We see actually that because of the greatness of God, the one principle of life is praised in various ways. Other angles are the individual members of a unique self” (Nirukta, VII, 4): cf. Ruysbroeck, Adornment …., Ch. XXV, “because of His incomprehensible nobility and sublimity, which we cannot rightly name nor wholly express, we give Him all these names.”

Iconolatry, however, was not left to be regarded as an ignorant or useless practice fit only for spiritual children: even the greatest, as we have seen, visited temples, and worshipped images, and certainly these greatest thinkers did not do so blindly or unconsciously. A human necessity was recognized, the nature of the necessity was understood, its psychology systematically analyzed, the various phases of image worship, mental and material, were defined, and the variety of forms explained by the doctrines of emanation and of gracious condescension.

In the first place, then, the forms of images are not arbitrary. Their ultimate elements may be of popular origin rather than priestly invention, but the method is adopted and further developed within the sphere of intellectual orthodoxy. Each conception is of human origin, notwithstanding that the natural tendency of man to realism leads to a belief in actually existent heavens where the Angel appears as he is represented.

In the words of Sukracarya, “the characteristics of images are determined by the relation that subsists between the adorer and the adored”: in those cited by Gopala Bhatta from an unknown source, the present spiritual activity of the worshiper, and the actual existence of a traditional iconography, are reconciled as follows- “Though it is the devotion (bhakti) of the devotee that causes the manifestation of the image of the Blessed One (Bhagavata), in this matter (of iconography) the procedure of the ancient sages should be followed.”

The whole problem of symbolism (pratika, “symbol”) is discussed by Sankaracarya, Commentary on the Vedanta Sutras, I, I, 20. Endorsing the statement that “all who sing here to the harp, sing Him,” he points out that this “Him” refers to the highest Lord only, who is the ultimate theme even of worldly songs. And as to anthropomorphic expressions in scripture, “we reply that the highest Lord may, when he pleases, assume a bodily shape formed of Maya, in order to gratify his devout worshippers”; but all this is merely analogical, as when we say that the Brahman abides here or there, which in reality abides only in its own glory (cf. ibid, I, 2, 29).

Parenthetically, we may remark that stylistic sequences (change of aesthetic form without change of basic shape) are a revealing record of changes in the nature of religious experience; in Europe, for example, the difference between a thirteenth-century and a Modern Madonna betrays the passage from passionate conviction to facile sentimentality. Of this, however, the worshipper is altogether unaware; from the standpoint of edification, the value of an image does not depend on its aesthetic qualities.

A recognition of the significance of stylistic changes, in successive periods, important as it may be for us as students of art, is actually apparent only in disinterested retrospect; the theologian, proposing means of edification, has been concerned only with the forms of images. Stylistic changes correspond to linguistic changes; we all speak the language of our own time without question or analysis.