The Origin and the Use of Image in India – Part 1

In this excerpt from the book “Transformation of Nature in Art” by Ananda K. Coomaraswamy, he explores the conception of Art in India. He analyzes icon worship in India and explains how the Hindus conceive divinity and how they worship it. He also analyzes the hypocritical attitudes of Christianity and Islam who blame Hindus of being superstitious. 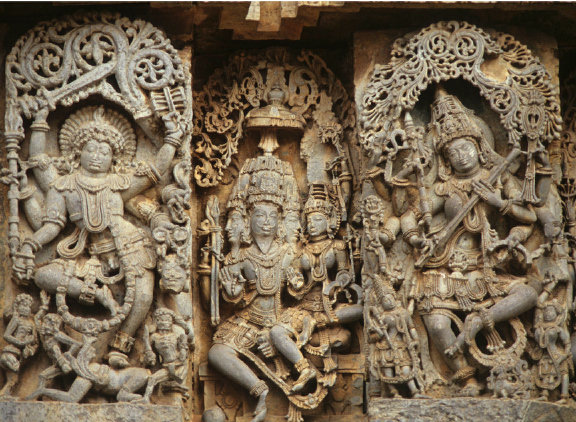 “It may be said that images are to the Hindu worshipper what diagrams are to the geometrician.” – Rao, Elements of Hindu Iconography, II, 28.

Few of those who condemn idolatry, or make its suppression a purpose of missionary activity, have ever seriously envisaged the actual use of images, in historical or psychological perspective, or surmised a possible significance in the fact that the vast majority of men of all races, and in all ages, including the present, Protestants, Hebrews, and Musalmans being the chief exceptions, have made use of more or less anthropomorphic images as aids to devotion.

For these reasons it may be not without value to offer an account of the use of images in India, as far as possible in terms of thought natural to those who actually make use of such images. This may at least conduce to a realization of the truth enunciated by an incarnate Indian deity, Krsna, that “the path men take from every side is Mine.”

In explaining the use of images in India, where the method is regarded as edifying, it should not be inferred that Hindus or Buddhists are to be represented en masse as less superstitious than other peoples. We meet with all kinds of stories about images that speak, or bow, or weep; images receive material offerings and services, which they are said to “enjoy”; we know that the real presence of the deity is invited in them for the purpose of receiving worship; on the completion of an image, its eyes are “opened” by a special and elaborate ceremony. Thus, it is clearly indicated that the image is to be regarded as if animated by the deity.

Obviously, however, there is nothing peculiarly Indian here. Similar miracles have been reported of Christian images; even the Christian church, like an Indian temple, is a house dwelt in by God in a special sense, yet it is not regarded as His prison, nor do its walls confine His omnipresence, whether in India or in Europe.

Further, superstition, or realism, is inseparable from human nature, and it would be easy to show that this is always and everywhere the case. The mere existence of science does not defend us from it; the majority will always conceive of atoms and electrons as real things, which would be tangible if they were not so small, and will always believe that tangibility is a proof of existence; and are fully convinced that a being, originating at a given moment of time, may yet, as that same being, survive eternally in time.

He, who believes that phenomena of necessity stand for solid existing actualities, or that there can exist any empirical consciousness or individuality without a material (substantial) basis, or that anything that has come into being can endure as such forever, is an idolater, a fetishist. Even if we should accept the popular Western view of Hinduism as a polytheistic system, it could not be maintained that the Indian icon is in any sense a fetish.

A good illustration of this is to be found in the Divyavadana, Ch. XXVI, where Upagupta compels Mara, who as a yaksa has the power of assuming shapes at will, to exhibit himself in the shape of the Buddha. Upagupta bows down, and Mara, shocked at this apparent worship of himself, protests. Upagupta explains that he is not worshipping Mara, but the person represented – “Just as people venerating earthen images of the undying angels, do not revere the clay as such, but the immortals represented therein.”

Here we have the case of an individual who has passed beyond individuality, but is yet represented according to human needs by an image. The principle is even clearer in the case of the images of the angels; the image per se is neither God nor any angel, but merely an aspect or hypostasis (avastha) of God, who is in the last analysis without likeness (amurta), not determined by form (arupa), trans-form (para-rupa). His various forms or emanations are conceived by a process of symbolic filiation. To conceive of Hinduism as a polytheistic system is in itself a naiveté of which only a Western student, inheriting Greco-Roman concepts of “paganism” could be capable; the Muhammadan view of Christianity as polytheism could be better justified than this.

In fact, if we consider Indian religious philosophy as a whole, and regard the extent to which its highest conceptions have passed as dogmas into the currency of daily life, we shall have to define Hindu civilization as one of the least superstitious the world has known. Maya is not properly delusion, but strictly speaking creative power, sakti, the principle of manifestation; delusion, moha, is to conceive of appearances as things in themselves, and to be attached to them as such without regard to their procession.

In the Bhagavad Gita, better known in India than the New Testament in Europe, we are taught of the Real, that “This neither dies nor is it born; he who regardeth This as a slayer, he who thinketh This is slain, are equally unknowing.” Again and again, from the Upanisads to the most devotional theistic hymns the Godhead, ultimate reality, is spoken of as unlimited by any form, not to be described by any predicate, unknowable.

Thus, in the Upanisads, “He is, by that alone is He to be apprehended” (cf. “I am that I am”); in the words of the Saiva hymnist Manikka Vacagar, “He is passing the description of words, not comprehensible by the mind, not visible to the eye or other sense.” Similarly, in later Buddhism, in the Vajrayana (Sunya Vada) system, we find it categorically stated that the divinities, that is, the personal God or premier angel in all His forms, “are manifestations of the essential nature of non-being”; the doctrine of the only reality of the Void (Behman’s “Abyss”) is pushed to the point of an explicit denial of the existence of any Buddha or any Buddhist doctrine.

Again, whereas we are apt to suppose that the religious significance of Christianity stands or falls with the actual historicity of Jesus, we find an Indian commentator (Nilakantha) saying of the Krsna Lila, believed historical by most Hindus, that the narration is not the real point, that this is not an historical event, but is based upon eternal truths, on the actual relation of the soul to God, and that the events take place, not in the outer world, but in the heart of man. Here we are in a world inaccessible to higher criticism, neither of superstition on the one hand, nor of cynicism on the other. It has been more than once pointed out that the position of Christianity could well be strengthened by a similar emancipation from the historical point of view, as was to a large extent actually the case with Schoolmen.