Noted Indologist and author Shrikant Talageri was awarded Honorary D.Litt. (Doctor of Letters) by Indus University, Ahmedabad at the 4th Convocation of the University. 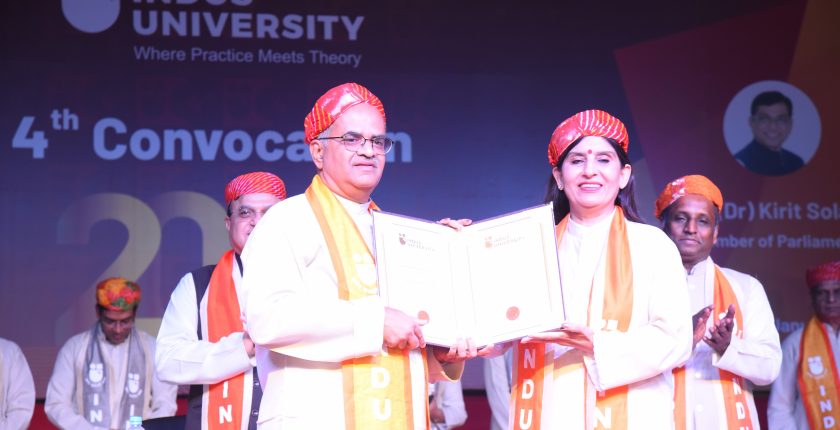 Noted Indologist and author Shrikant Talageri was awarded Honorary D.Litt. (Doctor of Letters) by Indus University, Ahmedabad at the 4th Convocation of the University. Author of five books, Shrikant Talageri was honoured with D.Litt. in recognition of his scholarly work and valuable contribution to the Aryan Debate concerning the origin and homeland of the Indo European languages. The Convocation was held on 18th of January, 2020. Noted Indologist and author of many books, Dr. Koenraad Elst was also present at the occasion.

Shrikant Talageri’s work is considered groundbreaking in challenging and discrediting the colonialist and racially motivated Aryan Invasion Theory. Talageri is a strong proponent of the Out of India Theory. Through his impeccable research in Linguistics, Philology and comparative analysis of the Rigveda and the Avesta, Talageri has presented evidence establishing that Sanskrit and Proto Indo European language originated in India and spread across the Eurasia afterwards. His work has not been challenged and refuted so far.

Indus University has been dedicated to original research regarding Indic culture, history and civilization. To achieve this goal, it has opened a special department called Centre for Indic Studies (CIS). The stated goal of CIS is ‘Restoring the Dharmic Narrative of India’. The main activities of the CIS are: Indic Talks, Indic Courses and Indic Varta.

Indic Talks in which it records the greatest scholars, thinkers, leaders and activists working for Indic culture, history and civilization and publishes them on its YouTube Channel: CentreforIndicStudies. So far it has recorded more than 125 Talks or more than 50 scholars. Indic Courses is a first of its kind portal which is a repository of Online Courses on Indic Culture and Civilization. The CIS recorded more than 15 Courses so far.  The courses can be enrolled in at the CIS website: https://www.cisindus.org/. Indic Varta is the online magazine of the CIS.

Dr. Koenraad Elst, the Belgian Indologist who is also a Visiting Professor at Centre for Indic Studies, Indus University was also present on this occasion.