This is an excerpt from the book “Why Buddhism is True” by Robert Wright. It talks about Buddhism’s focus on ‘Nothing’ and Hinduism’s focus on ‘Everything’. In Hindu thought, specifically within a Hindu school of thought known as Advaita Vedanta, there is the idea that the individual self or soul is actually just a part of what you might call a universal soul. To put the proposition in Hindu terminology: atman (the self or soul) is Brahman (the universal soul). Now, to say that atman is anything at all – Brahman, whatever – is to say that atman exists in the first place. And the very birth of Buddhism, its distinct emergence within an otherwise Hindu milieu, is thought to lie largely in the denial that atman exists. 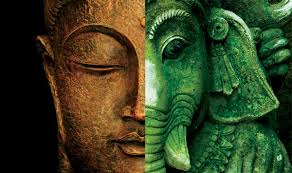 If you look at the logic marshaled by Buddhist philosophers on behalf of the doctrine of emptiness, you’ll see that it has much to do with a Buddhist idea that’s often rendered in English as “independence co-arising.” This basically means that things which may seem to exist independently of other things are in fact dependent for their existence and their character on other things. Trees need sunlight and water, and indeed are continually being changed by these and other things they come into contact with. Streams and lakes and oceans need rain, and the rain needs the streams and lakes and oceans. People need air, and the air around them wouldn’t have the composition it has if people weren’t inhaling it and exhaling into it.

In other words: nothing Possesses inherent existence; nothing contains all the ingredients of ongoing existence within itself; nothing is self-sufficient. Hence the idea of emptiness: all things are empty of inherent, independent existence.

This, according to Buddhist philosophy, is the fact about reality that you are intuitively apprehending if, through extended meditation, you come to feel that things lack essence. And if, at the same time, you feel the bounds of yourself start to dissolve, then you’re just experiencing a larger expanse of emptiness, an emptiness that pervades not just all supposed things out there but also the supposed self in here. (This helps explain why, especially in Mahayana Buddhism, the not-self doctrine is sometimes depicted as just a special case of the broader doctrine of emptiness.) By way of understanding this pervasiveness of emptiness, Buddhist philosophers sometimes apply the term not self to things “out there” as well as things “in here”. Just as you lack self, trees also lack self, and so do rocks. Or, if you want to switch the terminology. Just as trees and rocks lack essence, you lack essence. Either way, it’s emptiness everywhere you look.

At least, that’s the argument. But it seems to me you could flip this Buddhist argument around to make the case that the ideas of pervasive emptiness and of oneness aren’t really as different as they sound. The hinge for the flipping is the term at the center of the argument: interdependent co-arising.

Interdependence is a much-used term these days. You might, for example, track the stock markets in several countries, notice that they tend to be correlated, and say, “Wow, there’s more interdependence among these economies that I had realized.” And here the second part of that Buddhist term, co-arising, would also be apt. After all, none of these economies would have become what they are had they not been interacting with the other economies.

It’s almost enough to make you wonder why some people get upset when someone like Weber talks about oneness rather than pervasive emptiness. Why get indignant when somebody takes an arguably defensible position on a somewhat obscure semantic question? But the philosophical stakes are greater than you might think. And here we come to the aforementioned clash between Buddhist and Hindu philosophy.

In Hindu thought, specifically within a Hindu school of thought known as Advaita Vedanta, there is the idea that the individual self or soul is actually just a part of what you might call a universal soul. To put the proposition in Hindu terminology: atman (the self or soul) is Brahman (the universal soul). Now, to say that atman is anything at all – Brahman, whatever – is to say that atman exists in the first place. And the very birth of Buddhism, its distinct emergence within an otherwise Hindu milieu, is thought to lie largely in the denial that atman exists.

So you can see why bringing Gary Weber into a course on Buddhism might get me into trouble. To say that “everything is all one thing” is, by philosophical implication, to say that the self exists, which in turn is to suggest that, among Eastern Philosophies, Buddhism isn’t so special after all.

But here’s the funny thing: Weber had actually denied that the self exists. He had explicitly tied his sense that “you are everything” to his sense that “you are nothing”. Indeed, a later part of the video dialogue reinforced that link. In it, I said to Weber, “I have had a meditative experience where the bounds of myself in a certain sense suddenly seemed more permeable – that is, like the place where the bird’s song enters my sensory apparatus no longer seemed like such a fine dividing line.”

“Exactly,” he replied. I continued, “But that was like a one-time, brief experience. … you’re saying that as you walk around every day, you in a way identify with everyone else as much as you identify with yourself?

“Yeah, I’d say it’s a little different from that, but not far different. I don’t identify with anything. I mean, there’s nobody here to identify with me or with anyone else. It’s just an empty, still presence here [inside my body], which is there [beyond my body].”

I said, “So the problem with saying you identify with everyone is that first word, you.” “Exactly, because there’s no you there to do the identifying.”

How can he talk this way – so paradoxically, and in a language that isn’t fully Buddhist or fully Hindu? Well, as for the paradox part, as I suggested near the outset of this book, if you don’t like paradox, maybe Eastern philosophy isn’t for you. (And, as I also suggested, neither is quantum physics.) As for Weber’s refusal to talk like a doctrinaire Buddhist or a doctrinaire Hindu, having studied for years in the Vedanta tradition and for years in Buddhist traditions, he’s not wed to any particular philosophy. So when he has a meditative experience, he’s not bound by allegiance to interpret it any one way. He just tells you how it feels.

This suggests an interesting possibility: maybe the deepest meditative experiences had by Buddhists and the deepest meditative experiences had by Hindus in the Advaita Vedanta tradition are basically the same experience. There is a sense of dissolution of the bounds of self and an ensuing sense of continuity with the world out there. If you’re Buddhist (at least, a Buddhist of the mainstream type), you’re encouraged to think of that as a continuity of emptiness; and if you’re a Hindu, you’re encouraged to think of it as a continuity of soul or spirit.

For that matter, maybe some Abrahamic mystics – Christians, Jews, Muslims – who during contemplative practice feel a union with the divine are having somewhat the same experience as the Hindus and Buddhists, and interpreting it in a way that is closer to the Hindu than the Buddhist perspective. The core experiences remain the same, but the doctrinal articulation varies.

And, actually, maybe the articulations aren’t as different as they seem. Both the Hindus and the Buddhists – and, in a sense, even the Abrahamic mystics – are saying that our ordinary conception of the self as this distinct, sovereign thing is in some sense illusory: we feel a boundary that is not ultimately as real as we think, and moving toward the ultimate truth involves the dissolution of that boundary.

Anyway, my basic view of religious beliefs is that the ultimate question isn’t their specific content, but rather: What kind of person do the beliefs make you? How do they lead you to behave? There is reason to think that this basic Buddhist-Hindu idea – that the bounds of self aren’t really bounds – can lead to good behavior.

I agree with Weber: he shouldn’t do something bad to me. In fact, I even agree, in principle, that I shouldn’t do something bad to him or to other people. The problem is that, for me, this is just an abstract belief, not a deeply, experientially grounded intuition in the sense that I suspect it is for him. Which may help explain why I don’t always abide by it. And, apparently, if I’m going to feel this intuition as strongly as he feels it, or as strongly as Brewer feels it, I’m going to have to log another, oh, ten thousand hours of meditation. And life is short!

Fortunately, there’s a way that, without meditating three hours a day for ten years, I can get some idea of what kind of person that might make me. One great thing about meditation retreats is that, through total if temporary immersion, they give you a fleeting glimpse of what it might be like to live life as a really serious meditator. And I’ve gotten some sense on retreats of the connection between the not-self experience and being a better person.

The "inward" guru and the "outward" world
Panpsychism: How It Changes Our Worldview
How Secularization leads to Ecological Degradation