On Dhimmis – How Islam Treats Hindus

This is part 5 of the earlier article On the Nature of Islam. This is a tract written on the Nature of Islam in context of the rising Islamic terrorism the world over in 2002. This article discusses the legal status of Hindus in an Islamic state and how many disabilities they endure. They are ultimately primed for conversion to Islam. Note: Krishnaswami is a penname of an author, who for more spiritual than political reasons, shall remain anonymous. 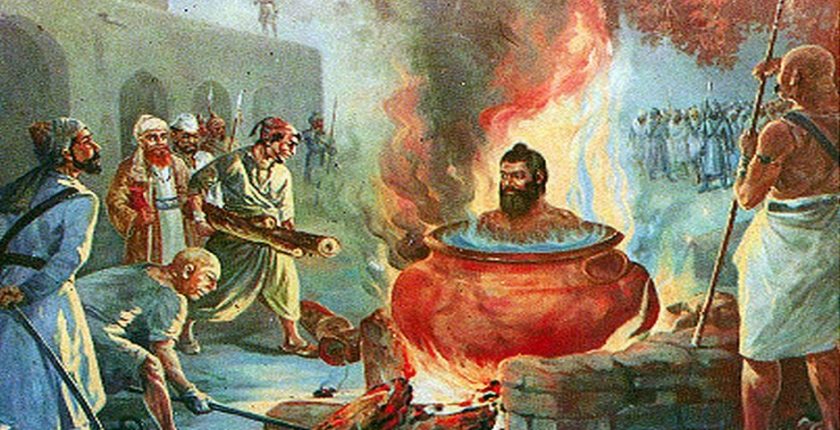 Hindus, by Islamic law, hold second class status in a country ruled by Islam. The Hadis and the four “pious” Khalifas elaborated the prin­ciples which are to be applied in jihad against those who do not accept Islam nor agree to pay jizyah tax. The non-muslim males capable of bearing arms are to be massacred; the non-muslim women and children are to be enslaved; the movable properties of the non-muslims are to be looted; their lands are to be confiscated; their temples are to be destroyed; their priests and monks are to be killed and their libraries, literature and scriptures burnt.

Those who agree to pay jizyah tax are to be treated as Dhimmis who are allowed to live and work for the Islamic state under the following 20 disabilities:

When an Islamic state was established over parts of northern India, the Ulama raised a great controversy. By now the inter­preters of Islamic law had become divided into four schools — Hanafi, Hanbali, Maliki, and Shafii. The Hanafi school of Islamic law alone was in favour of extending the status of dhimmis to the Hindus. The other three schools were insistent that the only choice the Hindus had was between Islam and death. Ziyauddin Barani voiced his opinion against the Hanafi school of law when he wrote as follows in his Fatwa-i-Jahandari: “If Mahmud…had gone to India once more, he would have brought under his sword all the Brahmans of Hind who, in that vast land, are the cause of the continuance of the laws of infidelity and of the strength of idolators; he would have cut off the heads of two or three hundred thousand Hindu chiefs. He would not have returned his slaughtering sword to its scabbard until the whole of Hind had accepted Islam. For Mahmud was a Shafiite, and according to Imam Shafii the decree for Hindus is Islam or death, that is to say, they should either be put to death or accept Islam. It is not lawful to accept jiziya from Hindus who have neither a prophet nor a revealed book.” (The Story of Imperialism in India/ Sita Ram Goel / p. 90 – 92)

The Jizyah Tax on Hindus has played an enormous role in the spread of Islam in India. The so-called Sufi-saint Amir Khusrau laments that had Hanafite law, not prevailed in India, which allows Kafirs the concession of survival on payment of Jizyah tax, the Hindus would have vanished root and branch:

Literally translated from Persian, -“Did the Dhimmis (the second class Hindu citizen under Muslim rule) not enjoy the concession of shariya, all trace of the Hindu would vanish root and branch. (Amir Khusrau/Ashiqah/Ed. By Rashid Ahmad Ansari/ Alligarh/ 1917/ p.46)

The “law” of Islam also prescribes death penalty for those who:

Non-Muslims are also discriminated against, in matters of testimony in law courts, taxation, and appointment to public offices. To sum up, the status of non-Muslims (dhimmis) in an Islamic state is that of hewers of wood and drawers of water. They are subjected to every possible indignity and pressure in order to force them into the fold of Islam.

Indian Muslims are descendants of these victims of Islamic imperialism. They are culturally and anthropologically very much Indians. Due to the imposed alien Arab ideology of Islam, their loyalties lie with the pan-Islamic issues, as they do not know the cruel history of the forced conversion of their ancestors. This unfortunate situation has induced an ‘identity crisis’ among them and turned them into a culturally rootless and hostile mass.

Collectivism vs. Atomism - Left vs. Right - FR - Part 2
The Mughals through Travelers’ Eyes
Jizyah: The Tax of being Non-Muslim