India and the Islamic Dark Ages – 2

This is part 4 of the earlier article On the Nature of Islam. This is a tract written on the Nature of Islam in context of the rising Islamic terrorism the world over in 2002. This article discusses the atrocities done on Hindus by Islam during its rule in India and also the concept of ‘negationism’. Note: Krishnaswami is a penname of an author, who for more spiritual than political reasons, shall remain anonymous. 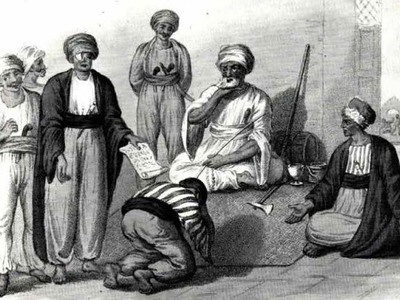 About the large scale distribution of Hindu girl slaves on the occasion of celebration of Muslim festival of Id, Ibn Battuta writes:  “First of all, daughters of Kafir Hindu Rajas captured during course of the year, come and sing and dance. Thereafter they are bestowed upon Amirs and important foreigners. After this, daughters of other Kafirs dance and sing… The Sultan gives them to his relatives. On the day after Id the Darbar is held in a similar fashion. Female singers are brought out… The Sultan distributes them among the Muslim officers…” (Ibn Battuta /63). “Thousands of Hindu women were distributed in the above manner in later years to celebrate Id festival”  (Afif / Tarikh-i-Firoz Shahi/ 119-20/ 180/265).

According to Hedayah every slave girl could be used as concubine. Obtaining wives and concubines through all kinds of criminal means – capture, purchase, enslavement—was in vogue among Muslims.

Fatawa -i- Alamgiri declares “If the breasts are large or vagina wide or baggy (which does not give requisite pleasure) whether in a virgin or a non-virgin, the purchaser has a right to return her to the seller and claim refund of money.” … (Fatawa -i- Alamgiri/ Deoband/ xxiv/ 5-6, 26-27).

ZiyauUddin Barani reckons regulations regarding sale of  “horses, slaves and quadrupeds” under one category …(Barani/ 312).  Very similar rules apply both to the sale of animals and Hindu bonds men. “ A milch buffalo caused 10 – 12 tankahs, a working girl was cheaper. The price of a good quality horse was 90 – 120 tankahs that of a ghulam was 100 on an average. A handsome young boy could be obtained for 20 to 30 tankahs.” …(Barani/Tarikh-i-Firoz Shahi/ 314 – 15). It is therefore a matter of some satisfaction that under the Khaljis the value of Hindus in terms of price was not less than that of horses and buffaloes.

Hindu boys and men in thousands were emasculated in to Hijiras (eunuchs) to serve the Muslim cities as servants and guards in the harems.  Most of the Hijiras (eunuchs) comprised of Hindu slaves captured during wars and then castrated i.e. their sexual organs were removed. “During Aurangzeb’s time, in the city of Hyderabad, in the year 1659 alone, 22,000 individuals were emasculated and converted into hijiras”… (Michel Erlich/ Les Mutilation Sexuelles/ Paris/ 1991/ p.59)

The custom of taking favorite homosexual hijira slaves in Palkies (palanquins) seems to have been common so that Sultan Sikander Lodi. (1489-1517) could boast that “ If I order one of my slaves to be seated in a palki, the entire body of nobility would carry him on their shoulders at my bidding”… (Tahrikh-i-Daudi ). This statement incidentally conveys an idea of the importance of handsome favorite hijira slaves and also reflects on the status of nobles under autocratic Muslim rulers. Alauddin had a corps of 50,000 personal slaves, Mohammed Tughlaq 20,000 and Firoz Tughlaq 40,000. (Tarikh -i- Firoz Shahi / Shams Siraj Afif/ 270, 272)

According to Ibn Khaldun, the captives after war were “brought from the House of War to the House of Islam under the rule of slavery, which hides in itself a divine providence; cured by slavery, they enter the Muslim religion with the firm resolve of true believers…”  (Ibn Khaldun; Ibar, trs./ Bernard Lewis in Islam/ 98). Muslims took pride in enslaving people; the feelings of Hindu victims were just opposite. In the flowery language of Edward Gibbon, “ By the repetition of a sentence (kalima) and loss of a foreskin, subjects or the slave, the captive or the criminal, arose in a moment the free or equal companion of victorious Muslims. ”  ( Gibbon/ii/782 and 720).

How did the Hindu women react to such a desperate situation? When Sindh lay prostrate before the armies of Mohammed bin Qasim, “Raja Dahir’s sister Bai collected all the women in the fort of Rawar and addressed them thus: ‘it is certain that we cannot escape the clutches of these Chandals and cow-eaters… As there is no hope of safety and liberty, let us collect firewood and cotton and oil and burn ourselves to ashes’. All of them were of one mind, and so they entered a house and set fire to it, and soon burnt to ashes…(Chachnama / Kalichbeg /153-55/E.D./ I /181)

Thereafter, throughout the medieval period, as soon as it was certain that there had been a defeat and the men had been killed, women perished in the ‘fire of Jauhar’, Jiva-har, i.e. taking of life.

The Jauhar at Chittor during Akbar’s invasion may be mentioned as an instance in the Mughal period. On the night of 23 February 1568, after Rajput commander Jai mal’s death people of Chittor resolved to perform the rite of Jauhar. Flames broke out at various places in the palace, as many as three hundred Hindu women were burnt in the fire of Jauhar…(Akbar Nama / II / 472 )

During Jujhar Singh Bundela’s resistance in the Orcha in the time of Shahjahan, many women were captured by the Muslim army and treated most cruelly. It was in this fashion that Hindu women used to be captured and distributed for the service in the harems of the Muslim elite…(Cambridge History of India / IV / p.195)

“A left-over from this period is the North-Indian custom of celebrating weddings at midnight: this was a safety measure against the Islamic sport of bride catching” (K. Elst/ Negationism in India/ Voice of India/ New Delhi/ p.28)

“Here we should remember the Devshirme system (Greek for ‘collecting boys’). Initiated by the Ottoman Sultan Orkhan ( 1326-1359), it existed for about 300 years. It consisted of a regular levy of non-Muslim children from the enslaved population of the Balkans. These Christian, Jew and Gypsy turned Muslim children of about the age of seven, were trained to fight against their own erstwhile brethren. This system of forced levy of children formed for centuries the mainstay of the despotic power of Islam in Balkans and was kept alive by a regular contribution exacted on enslaved innocent populations annually in contingents of a thousand children. The Mohammedan legal expert attempted to apologize for this inhuman tax, collected in the form of live human beings, by representing these collected non-Muslim children as the one-fifth of the loot which the Holy Koran legally assign to the Muslim ruler as his lawful share”.

“A sort of Devshirme system still exist today in the Islamic Sudan and has been described and denounced by the United Nations Special Rapporteur Mr. Gaspar Biro in his 1994 report, and by an article in the Times of London—“Sudanese Christian sold as slaves”, August 25, 1995”. (Bat Ye’or / The Decline of Eastern Christianity Under Islam, 7th to 20th century: from Jihad to Dhimmitude/ Associated University Presses/ 1996).

According to Francois Gautier – “This is the profession of faith of a Muslim ‘I certify that there is no other God than Allah, of whom Mohammed is the only prophet’ which means in effect: ‘After and before Mohammed, there is nobody else’…. “Thus the whole religion of Islam is based on negation: nobody but us, no other religion but ours. And if you disagree, you shall die. This puts a serious limitation to tolerance and from this strong belief sprang all the horrors of the Muslim invasion of India”… (Arise Again, O’ India!).

“Entire cities were burnt down and their populations massacred. Every new invader made, often literally, his hill of Hindu skulls. Thus the conquest of Afghanistan in year 1000, was followed by the annihilation of the entire Hindu population there, indeed, the region is still called ‘Hindu Kush’, meaning Hindu Slaughter”… (ibid). Hindu-Kush range is literally the mountain of evidence of Islamic crimes against humanity. Muslims can still have a clean conscience and praise Islam, wonder!!!.

Francois Gautier writes, “The happiest in this matter must be the Muslims themselves. What fools these Hindus are, they must be telling themselves, we killed them by the millions, we wrested the whole nation out of them, we engineered riots against them and they still defend us!…” (ibid).

“NEGATIONISM means that this whole aspect of Indian history has been totally erased, not only from the history books, but also from the memory, from the consciousness of Indian people. Whereas the Jews have constantly tried, since Nazi genocide, to keep alive the remembrance of their six million martyrs, the Indian leadership political and intellectual (that is professional pseudo-secularists) has made a willful and conscious attempt to deny the genocide perpetrated by the Muslims. No one is crying for vengeance. It is only a matter of making sure that history does not repeat its mistakes, as alas it is able to do today. Witness the persecution of Hindus in Kashmir, whose 250,000 people have fled their 5,000 year old homeland; or the 50,000 Hindus chased from Afghanistan; or the oppression of Hindus in Bangladesh and Pakistan. And most of all, to remember, is to be able to look at today with the wisdom of yesterday. No collective memory should be erased for appeasing a particular community… (Ibid.)

Delimitation of Constituencies: The Crisis and the Solutions
Examination of Advaita Spirituality - Dharma vs. Religion - Part 2
On the Nature of Islam