Signs of the Divine

This is an excerpt from the “Human and Divine: 2000 Years of Indian Sculpture” by Balraj Khanna and George Michell. Balraj Khanna in this short excerpt discusses the symbolism of Indian Art. He explains how the various mudras, postures and ayudhas of the deities convey different aspects and moods of the divine. 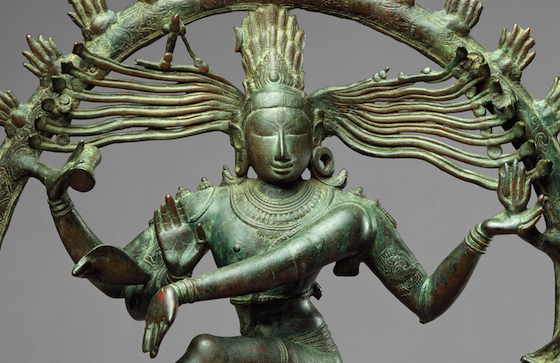 Most of the imagery in Indian art is symbolic. If a god or goddess sits or stands in a certain position, whether alone or in conjunction with other gods or humans, the pose instantly conveys part of the divine lore or a special spiritual message.

For example, the four-armed Vishnu in a standing position is often seen carrying four attributes associated with his regal nature. The mace he holds in one of his hands announces his divine authority; the lotus in another signifies his links with the primordial waters from which all life sprang. The call of his conch shell can be heard resoundingly all over the world. The Chakra (his divine discuss) is a lethal weapon which can swiftly vanquish his foes.

Shiva as Maheshvara (Great God), sits in the lotus position. He is Prakasha, Light, the Primal Radiance. Uma, one of the names of his wife Parvati, sits on his left thigh. She holds up a mirror in her left hand, not to exult in her own matchless beauty, but to proclaim to the world her true nature which is a reflection of Shiva’s light and, by extension, that of creation. It is this very special light radiating from Maheshvara which makes Uma so unetherially beautiful – a perfect picture of a happily married couple resonating with Shringara rasa, like a perfectly composed raga (melodic framework), a picture rich in symbols.

Kali, the most mysterious of all deities, is feared and revered as no other. Multitudes throng to her famous early nineteenth century temple in Calcutta just for a brief darshan (a mere glimpse) of her diminutive black status. Clad in deep red silks and heaped with her favorite blood red lilies, Kali’s red tongue lolls in lust for the blood of demons. Kali is the original mother goddess. She is Shakti, power or force.

All nouns in India have a gender and Shakti is feminine: Kali remains feminine, despite her frightening countenance. She can appear also as Uma or Parvati, beauteous and tender, or again as Durga, the Unapproachable Warrior Queen. She is the female principle of creation – Mother, Time, the Destroyer, and, therefore, also the Creator. When she is seen standing on her prostrate spouse Shiva, she is illustrating the fundamental Indian belief that the female aspect of creation, that which gives birth to life, is superior to the male as represented by Shiva.

The Buddha sits in the lotus position, eyes half-closed, trance-like, indicating deep meditation and a state of higher consciousness. His hands are either held together on his lap, or they may be raised chest-high in other mudras. Sitting or standing, when the palm of his right hand is held open in abhaya mudra towards his devotees, like a hand mirror, he is offering them a benediction and reassurance, saying to them, ‘Do not fear, I am with you’. His message is instantly understood in Sarnath in Bihar, east India (where he preached his first sermon after attaining Enlightenment in the sixth century BC), or by a devotee in Japan thousands of miles away in 2000 AD. When his hands and fingers are held in circular dharma chakra mudra, a gesture indicating the wheel (chakra) of the law of duty (dharma), he is teaching the essentials of moral law as expounded by him.

So many images tell well-known stories. For example, after a long duel with the giant serpent Kaliya, the victorious adolescent Krishna dances on the hood of the venomous snake in a superb bronze from south India. Having made himself master of the sacred river Jumna where it passed through the forest near Mathura, the dangerous reptile had begun terrorizing the local population of gopas, Krishna’s rustic kinsmen. They had no one to turn to but the young god in their midst. Krishna responded with alacrity. The dreaded snake was subdued in a pitched battle and, Krishna’s victory dances over, it was banished to the distant sea, never to return.

Perhaps the most memorable image in the whole of Indian sculpture is that of Shiva as Nataraja. ‘Lord of the Dance’. It is the blissful dance of the cosmos of which Shiva is lord and master. He creates, he destroys, he creates – in a never-ending cycle of time. Indian tradition views time not as linear but as cyclical – without beginning or end.

Trampling on a dwarf who represents ignorance, shiva dances to the beat of the drum (Time itself), which he holds in his upper right hand, whilst the flame of destruction is in his corresponding left hand. His lower right hand is held up in the ‘do not fear’ abhaya mudra, while his fourth hand hints at protection for the devotees. The circles of flames surrounding the Cosmic Dancer symbolizes the universe in its cyclical continuation.

The image of Shiva Nataraja is perhaps the most dramatic single image in all art. Imperious and arresting in its majestic display of a compelling visual vocabulary, it radiates immense awe-inspiring dynamism. The palpable vitality of its movement and the totality of its impact grips us as few single images do. With his matted locks flying about furiously and his arms and legs in fast rhythmic motion, Shiva is not dancing to entertain, but to involve the world in his dance and to awaken it to the wonder of creation. 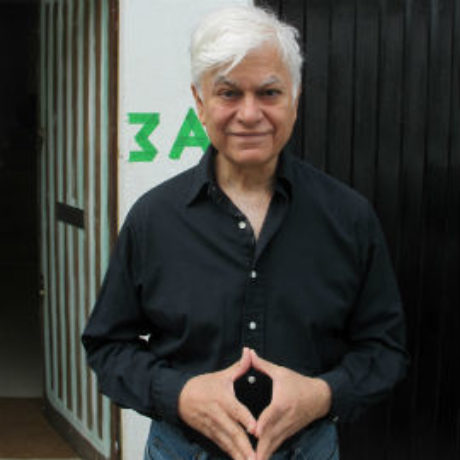