Apaurusheya and the Origin of Language

In this excerpt, Shri Anirvan talks about Apaurusheya and how the origin of language is related to it. Sanatana Dharma, its scriptures, its philosophy and its institutions are famous for not crediting the individual for certain achievement, or failure, for that matter. Indian arts, famously remain nameless. Shri Anirvan, in this very deep piece analyzes the basic idea of Apaurusheya behind this tradition. 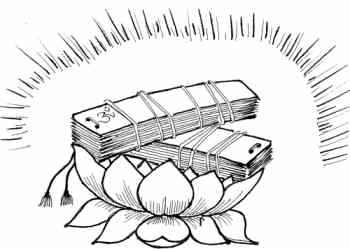 The followers of the Vedas regard the scriptures firstly as revealed truths and then as the statements of one who is realized and has perceived the Dharma: in short, the words of one who is reliable (Aptavakya). The words of such a knowledgeable and trustworthy one reveal to us that fundamental or ultimate truth which is not possible to learn through any empirical method. It is not just narration of a profound truth that the trustworthy thus conveys, he also instructs about the way to gain mastery over it. This, the reliable do with the help of their own in-depth experience collected in the innermost recess of their beings.

Thus their words naturally unfold the significance of two kinds: one, the narration of the truth, and the other, the way to its attainment. Just as the knowledge enunciated by the trustworthy is of transcendental (Alaukika) character, so is the character of its attainment. In order to attain the transcendental knowledge, it is necessary to refine or transform the empirical knowledge. This leads to the origin of the supra-natural science of mind that is founded on the folding back of the consciousness inward. There are various means of inward folding back of consciousness; and there are also differences in the depth of these layers of experiences.

From this angle, there may be various rungs in the evidence of the trustworthy (Aptapramana). This, however, is indisputable that in reality, this experience is grounded on a fundamental tendency of human consciousness (Cittapravrtti). When the supra-mundane sphere becomes the means of visualization of the transcendental, then the ritualism originates. The injunctions of liturgy too are authority-sanctioned (Ajnasiddha) in character because they have their roots in the transcendental experience of the trustworthy (Apta). The instructions about rituals do not merely govern the practices concerning rites, these over times also spread in all areas of human life and thus the religious injunctions begin.

It is a natural trait of the human mind to have faith in the truth realized by a trustworthy (Apta). That the utterances of ones who realized truth (Aptavakya) influenced all religions the world over is indisputable; why faiths alone, this is true of any scientific quest as well. The words of the credible (Apta) are not just a support of unproductive faith, they provide inspiration to scientific forward march. This may also be termed as a creative spirit of a society. Be it in the realm of empirical science or in that of spiritual quest, the words of the credible (Apta) energize a man to go for a date with the unknown by awakening his natural inquisitiveness. Consequently, that the horizons of human knowledge get expanded is clearly evidenced in the domain of empirical science.

Whether the horizons of enlightenment in the area of transcendence gets even more expanded is to be considered – because here the course of journey moves towards the other end. But it can be said without hitch that through the single-minded dedication of numerous seekers of truth, the unprivileged section of the society over times get enlightened.

It may appear that at the source of this claim, lies the ever-going contest between the Nara and Vipra, between rationality and faith. The Vedic religion was a social force, the might of a collective whole. It is always the individual who has to rebel against the inertia of the masses. Therefore, in this country those who were the critics of the Vedic faith also became founders of one or the other human-centric doctrines. Thus it is not improbable that facing the onslaught from them, the followers of the Veda developed a natural urge to establish their distinctiveness on the basis of the doctrine of Apauruseya. However, on a closer examination, it cannot be said that this theory (Apauruseya) has arisen merely from rational thinking. We find the origin of this view in the Veda itself – in the concept of Vak.

The gradual expansion of the Brahman, that is the consciousness, and the Vak, that is its outward manifestation, and the inseparable relation between the two constitute a central principle of Vedic philosophy. In later age the grammarians and the followers of Tantra have attempted to elaborate this theory in various manners. In fact, this issue is connected with the question of the origin of language.

The Vedic view on this is as follows: the vibration that is created by an eternal mood (Bhava) in its urge to manifest itself leads to the origin of language. As this language is the language of Devata (div-light), so it is luminous; and this is what a Mantra is. This Mantra is not the symbols or signs created by humans that get transmitted from the elders to children. This is a spontaneous expression – the pulsation of language compatible with the feeling (Bhava). After taking the three strides, when language or speech progressively reaches the fourth stage then only it takes again the help of man-created signs. In the culmination of this ecstatic state, the vitality of that original throbbing remains fully intact. So this articulated Mantra (hymn) should be given the same status as that of the deeply mysterious primeval pulsation. As the original pulsation was supra-human, so was the Vaikhari Vak (speech articulated through tongue). The Rsis are not creator of Mantra, they just had the vision of the Mantra.

From this brief introduction of the Vedic concept of Mantra (Mantravada) this much is clear that as modern science has been trying utmost to avoid human factors in its knowledge-constitution, the followers of the Veda have done exactly the same. One of the arguments of the Mimamsakas in this regard is that it is not unlikely for ordinary people to suffer from error (Bhrama), carelessness (Pramada). Craftiness (Karanapatava) or desire to cheat (Vipralipsa), so the foundation of spiritual knowledge and practice should be of supra-human (Apauruseya) origin. A human being can be its spokesman but his words must not make any ownership claim.

In the manifestation of truth, domination of no Being (Purusa) is admissible, not even of an imaginary Being called Isvara; and the question of Prophets, etc., does not even arise. The Mantra is merely words – words not even of Isvara. The natural effusion of the words, the very intensity of it will lead a man towards attaining perfection (Siddhi) and obtaining fulfillment (Rddhi). A man only has to follow it with reverence. When we ponder deeply we find that this idea of the Mimamsaka is a wonderful contribution to the genre of spiritual thought. As this idea pervades the entire stream of Vedic philosophy, the Vedic faith could not become a Protestant or missionary religion. This is the fount of both its strength and weakness.

In fact, self-realization of consciousness is the fundamental tenet of the Apauruseyavada. Without any sense of partisanship, I can say that the source of all religion is supra-human. Bharatavarsha has admitted this since the very beginning. When the issue of truth after crossing its linguistic manifestation rose to the level of ontological consideration, at that stage there remained no distinction between the Vedic and non-Vedic streams – imperceptibly they met at a common plane of exemplary consciousness (Aryacitta) of the vision of the supra-human essence.

Thus we find in the later ages of Indian spiritual quest too, like that in the original Vedic age, the paths of spiritual practice of the Nara (rationalist) and Vipra (intuitionist) coalesced. Kapila, Kanada, Gautama were universally accepted in the society of the believers in the Veda even though they were rationalists. The Buddha, although was a non-Vedic, yet he was respectful to the original Veda and to the authentic Brahmins. ‘Brahmacarya’ was a common designation of the spiritual praxis of either the Hindu, or of the Bauddhas or of the Jaina.

And, in this very term ‘Brahman’, the entire history of spiritual quest of India is encapsulated since the very Vedic period till today. Both the empirical and transcendental streams of the spiritual praxis of this country have merged in the resonance of this very term. It is the eternal longing of the human heart to seek the release of the stifled consciousness. From whichever sources the hope of such release arrives, they all have to be accepted as equally trustworthy (Aptavacana) in view of their transcendental resonance. The words of the credible (Aptavani) may be of God, of godly man (Devamanava) or these can be just inspired utterances. But in all the cases they are manifestations of an eternal transcendental supra-human (Apauruseya) truth (Tattva), because that truth has been obtained transcending the empirical procedure of the phenomenal world. It has been received through reverence (Sraddha), through the meditational fire of spiritual practice (Tapasya) and has been realized out of deep reflection of the inwardly-wrapped consciousness.

As this attitude always remained alive in the heart of India, so it has been extending the meaning of the Veda or Sruti at all times. One thing has to be borne of mind, that no matter how different outwardly various paths of spiritual practice in Bharatavarsha might have been, they all have mingled at one common plane of inner quest in response to a natural urge in human character. This quest is the Yoga.

There has been a fusion also in the formal paths of the spiritual quest in the Tantra. The Tantra in its comprehensive sweep has incorporated the Yoga as well. As Vedicism, on the one hand has endeavored to preserve its distinct form because it grew within a specified domain, on the other hand because of the force of its innate nature, its spirit spread into all areas of society. Tantra is the plebianized form of this Vedicism. If it is said that contemporary Arya-mind believes in the Veda but practices Tantra, then a wholesome picture of its spiritual pursuit emerges.

With the expansion of the philosophy of the Veda, the connotation of the term Sruti too has been broadened. Sruti does not mean Vedic Sruti alone, it also means the Tantrik Sruti. The authority of both the form is recognized. The manner of articulation of the Tantrik Sruti has been influenced by the Vedic notion of the Apauruseya Vada. Here also no matter who has been the original utterer, he has completely dissolved his entity in the utterance itself. The Veda at least carries the names of the Rsi composers, in the Tantra even that is absent. This is not just a deception or an imitation of the Veda, it is the expression of that fundamental trait which characterizes the Arya-mind. It is the bestowing of scientific character to the realized truth through the boundlessness of the trans-human.