The Palghar lynching of Hindu Sadhus is not a stand alone event. The hatred of everything Hindu, everything saffron has been institutionalized in Indian media, academia, polity, art and even economy. This has been going on for more than a century. The British initiated it but the Nehru dynasty continued this barbaric policy of Hindu hatred to the hilt. This article shows, how these lynching of Hindu Sadhus across India, which have frighteningly become a common event, are not isolated events, but the harvest of the hatred that Christian missionaries and Marxists have been brewing for the past few decades. 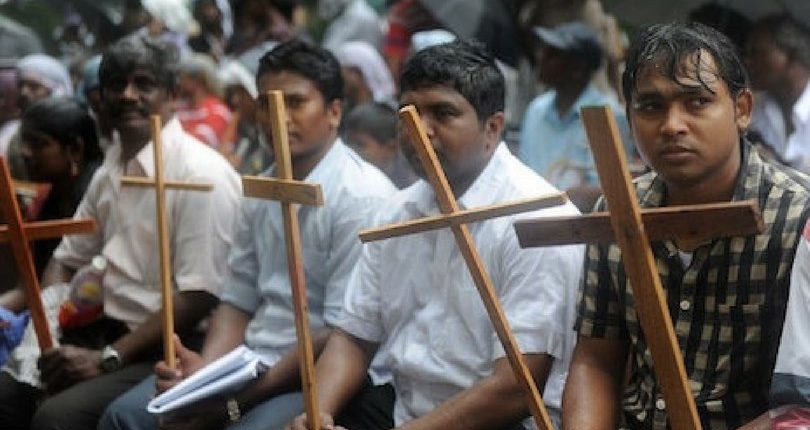 Ram Swarup and Sita Ram Goel stated very clearly that the rift in the religious fabric of India appeared for the first time when Islam appeared on India’s doors. The second rift appeared when Christianity invaded the sub-continent. While the destruction that came in the wake of Islam was great, the subtle destruction of India’s institutions, which was the work of Christian missionaries proved even more dangerous in the long run. The greatest success of Christianity in India is the institutionalization of the hatred of anything saffron, anything sacred in the Hindu society and dharma.

They had learned to mould public opinion even before mass media was born. They had created channels of influence, interconnected and driven from Christian religious zealotry. These channels were the hospitals, schools, universities, clubs and event halls which never kept their racist goal of Hindu hatred out of their sight.

Their schools would ban Hindi and other regional languages, ban all Hindu symbols, punish Hindu customs, in turn making Hindu haters out of Hindus themselves. The universities taught them to take it up to another level, inciting them to write dissertations and theses on breaking India themes with the single goal of cutting off the knowledge head of India. By targeting Brahmins and anything saffron they had put their knife on the pulse of the matter. They knew that India was its knowledge tradition. They knew that India was nothing if not its spiritual tradition. That is why they purposefully targeted the Brahmins and anything saffron.

Their clubs and event halls would give space for almost free to anti-Hindu racist events, making it not only acceptable but chic in the ‘elite’ society, society which consisted of the Hindu hating generations out of those St. Xaviers and St. Stephens.

By targeting real estate, Christianity grabbed all the land it could and is still buying like crazy. The Vatican/ The Catholic Church in India is one of the greatest real estate owners in India. And this real estate was targeted. They would often target the heart of the city, or the land just adjacent to the Hindu temple, the sacred heart of the city. They would target an ancient Hindu shrine in the jungles. Whatever they couldn’t buy, they just illegally occupied. Crosses would appear all over the places overnight.

They also targeted the hill stations of India. They knew that with increasing power of middle class they will want to flock these places for vacations and thus every hill station of India has a Church Street, and the entire business is mostly owned by them with Christian themed parties and symbols battering Hindus like a ram.

Above all, they created a business and a colonial supply chain out of the charity business. The sinister network of Christian owned, themed and governed NGOs in India with often a very thin veneer of United Nations would operate with impunity in India, converting tribals on gunpoint in remote areas and playing the charade of charity and social work in cities. That is why when the Modi led NDA government tried to cut the funding of the foreign-funded NGOs there was such a great commotion in the global circles.

The tribals that they could not convert were not left untouched. This Christian network was so successful in creating an anti-Hindu tradition in India, they had been so successful in institutionalizing Hindu hatred in India, that many Hindu tribals and backward castes developed a deep and inveterate hatred against everything saffron.

Moreover, by the back connections overseas they also created atrocity literature about Hindus, thus swiftly making the victims as perpetrators, ensuring that when the Christian missionaries would kill, maim and convert Hindus on gunpoint, the world media would either look away or blame Hindus themselves.

This is the measure of the success of Christianity in India.

That is why, the Mahrashtra government is only a temporary culprit. The real culprit are the Christian missionries and their sinister, racist and anti-Hindu network. THAT is what has to be dismantled.

Śri Rāma: Beyond Indology, History and Social Justice
Discovering the Temples of Goa 
In the Footsteps of Hind Swaraj. The Oeuvre of the Historian and Political Thinker Dharampal - 2